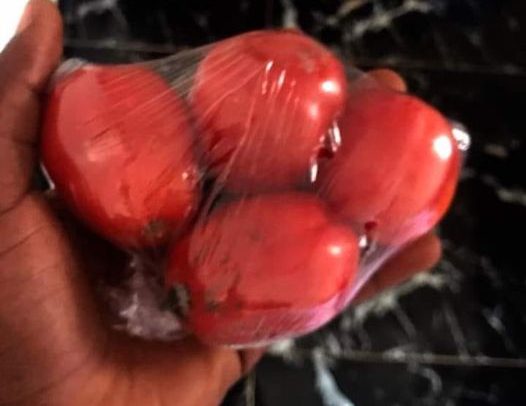 Prices of tomatoes in the Ghanaian market have reduced significantly, compare to the prices a couple of weeks ago..

Previously, a small paint bucket of tomatoes selling at GHC100 has now reduced to GHC30 in some major markets in Accra.

Previously, the price of tomatoes range between 80 to 100 cedis for the small paint bucket in some major markets in Accra about four weeks ago, per a report by the Ghana News Agency which monitored the price fluctuations of tomato prices over the last four weeks.

According to the GNA, the price of the small paint bucket which was selling between 40 and 50 cedis just after the Easter celebrations jumped to between 80 and 100 cedis early May, 2022.

The report stated that trader who mentioned her name only as Adobea, attributed the price hike of the commodity in early part of May to the long holiday.

“We had a long weekend followed by the Eid ul-Fitr celebrations, most of the market women could not travel to the farm gates to get the commodities during the period which resulted in scarcity,” she explained.

The prices, she stressed have started dropping because farmers in the south have started harvesting their produce and the commodity is now in abundance.

GNA checks on Monday at the Dodowa Market observed that the prices of the small paint bucket sold between 40 and 45 cedis, the same quantity sold at the Madina market between 30 and 40 cedis on Wednesday

The situation is not different at the Tema station market where the small paint bucket was selling between 40 and 30 cedis while the commodity sold at the Tudu market for 30 cedis for the same quantity.