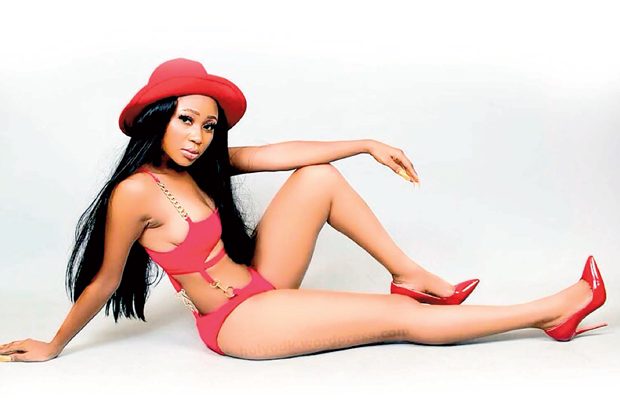 It was a sad scene at an Accra Circuit Court yesterday where actress Rosemond Alade Brown, aka Akuapem Poloo, was sentenced to 90 days imprisonment for publishing a nude picture of herself taken with her seven-year-old son, who was in his underwear.

The remorseful actress, who was all tears during the reading of the judgment, pleaded for mercy as her sentence was handed down to her.

She continuously begged the court presided over by Her Honour Christiana Cann by saying, “Mummy please, Mummy, I beg you, Mummy please,” while kneeling down.

But her plea as well as that of her lawyer, Andrew Vortia, fell on deaf ears as the presiding judge would hear none of it and went on to sentence her to 90 days imprisonment each, for all three charges to be served concurrently.

Akuapem Poloo was  facing three charges of publication of obscene materials, engaging in domestic violence, a  conduct that in any way undermines another person’s privacy or integrity and engaging in domestic violence namely conduct that in any way detracts or is likely to detract from another person’s dignity and worth as a human being.

The court in sentencing her took into consideration the aggravating facts, intrinsic seriousness of the offence, gravity, prevalence and premeditation with which she committed the offence as pushed by the prosecution.

The presiding judge, however, went on to express concern about the sudden increase in the abuse of children in the country.

The court in giving its reasons to buttress the sentence held the view that the action of the accused did not only infringe on the rights of the child but morally corrupted those who saw the post.

“The court is bothered with posting nude photos on social media. There is no doubt that apart from the canker of rape, defilement, physical assault, the publication of obscene materials are on the increase.

“There is, therefore, the need to uphold our societal values and deal with this canker. The best interest of the child shall be the primary concern of the court,” the judge said.

The court added that sentencing Akuapem Poloo must not only be punitive but must serve as a deterrent to society.

Last Wednesday, the court convicted Akuapem Poloo, for publishing nude pictures of herself on social media, which captures her son in the pictures.

The court however, deferred her sentencing to Friday, April 16, 2021 for her to undergo a pregnancy test in compliance with Section 313(1) of the Criminal Code (Act 30) and was subsequently detained ahead of the sentencing.

The court, before remanding her on Wednesday, asked her if she still stood by her change of plea to guilty and she said ‘yes’.

She was dragged to court after she had displayed her naked picture with her son on social media on June 30, 2020 to celebrate the boy’s birthday.

Brief facts of the case presented to the court by the prosecution led by Chief Inspector Agartha Asantewaa were that the complainant is Bright K. Appiah, the Director of Child Rights International Ghana.

According to the prosecution, on June 30, 2020, the accused person celebrated her son’s seventh birthday and she took her nude pictures together with her son, who was also half naked and posted same on her Instagram page, which went viral on social media.

She told the court that, the pictures attracted comments, adding that the behaviour of the accused person was likely to detract from the dignity of her seven-year-old son among others.

Chief Inspector Asantewaa told the court that the complainant petitioned the Director General of Criminal Investigations Directorate and the matter was referred to the Domestic Violence and Victims Support Unit.

Akuapem Poloo, she said, was arrested and in her caution statement, admitted posting the nude picture with her son unintentionally.

But prosecution held that the accused person had deliberately posted the nude picture taken with her seven-year-old son.

US Ambassador Calls on Communications Minister