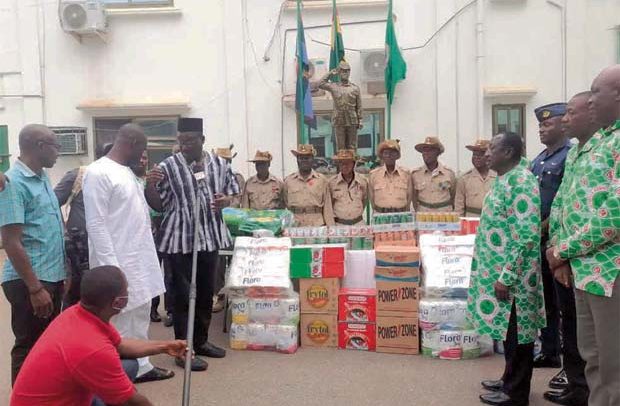 A scene during the presentation

Male members of the Greater Accra Region branch of the Ghana Bar Association (GBA) have marked this year’s Father’s Day celebration by making a donation to Veterans Administration, Ghana (VAG). They presented bags of rice, cartons of milo, milk, sugar, toiletries and others to VAG at the headquarters of the Administration, a day ahead of the celebration. In addition, they served members of the VAG contingent and VAG staff present a hot meal and dined with them as a sign of appreciating them.

According to a release issued by the Public Relations Officer of VAG, Ex WOI Bright Segbefia, the items were handed over by the President of the GBA, Mr. Yaw Boafo, and were received by the Executive Director of VAG, Capt Ben Edmund Duah (rtd).

The GBA President said, over the years, Father’s Day celebration has not been given much prominence despite the important roles by men in building homes and societies. They have, therefore, decided to change the status quo by coming out to make donations to certain selected groups across the country, adding that at the time that they were making the donation to VAG in Accra, other regional branches of the GBA were carrying out a similar exercise.

Explaining what influenced their choice of VAG in Accra, Mr. Boafo said, Veterans played invaluable roles in the country’s independence struggle and they, therefore, deserved to be honoured.

The GBA President observed that despite the turbulence in the ECOWAS sub-region, the country has remained peaceful, something he credited to the Armed Forces of the country. “If there are fathers who have laid down their lives for our stability, then they are our veterans,” said the GBA President.

Capt Duah, on behalf of VAG, lauded GBA for the gesture, saying that the donation was the first to have come from a distinguished organisation like the GBA appreciating men in Ghana who were represented by the veterans.

Capt Duah expressed the optimism that the GBA will give VAG the opportunity to collaborate with it.