Kuami Eugene Beats Sarkodie, Others To Win VGMAs Artiste Of The Year 2020 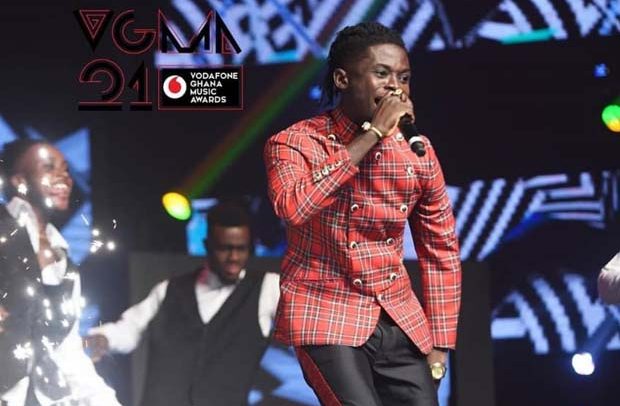 Kuami Eugene is the proud winner of the artiste of the year award at the 2020 Vodafone Ghana Music Awards (VGMAs), which was held on Saturday.

He has beaten top artistes like Sarkodie, Kofi Kinaata, Diana Hamilton and Medikal to win the most revered category of the award ceremony.

The Lynx Entertainment signee also won the highlife artiste of the year award, summing up two awards during the night.

“… From Fadama (a suburb of Accra) I don’t expect this. I am not joking—from Fadama I didn’t expect this. Thank you so much Eugene Mensa, I will never forget this. God bless you Lynx Entertainment…,” he said in his acceptance speech.

Many music observers had tipped fellow artiste Kofi Kinaata to win the artiste of the year award, but he rather went home with three solid awards like songwriter of the year, most popular song and hiplife song of the year.

“Team Move is proud and grateful for all the support regardless. Goodnight,” he said after the award ceremony.

Medikal’s ‘Omo Ada’ won him the hip-life song of the year in addition to his hiplife/hip-hop artiste of the year award, while Kwesi Arthur surprisingly beat Medikal, Eno Barony, Sarkodie, E.L, Teephlow and Strongman to win best rapper of the year.

The 21st VGMAs was a three-day virtual event which was held at the Accra International Conference Centre in (AICC). It started on Friday night through to Sunday night.

It was an unusual break in the event’s calendar as result of the Covid-19 outbreak. The show was held on the various nights amid observing Covid-19 safety protocols.

The first badge of the awards was given at the Friday night ceremony which was hosted by Giovanni Caleb and Sika Osei.

Saturday’s event was the second in the chain of events, and it was hosted by Kofi Okyere Darko (KOD) and Berla Mundi, both of whom brought a lot of excitement to the show.

The 2020 VGMAs was dubbed ‘The VGMA Weekend’, and it was organised by Charterhouse to celebrate steep culture, vivacious music and iconic artistes.

This event was peaceful unlike the 2019 edition which was marred by a gun and blows on stage.

It could be recalled that the 2019 edition was an exhibition of sheer lawlessness when two of Ghana’s rival dancehall artistes Shatta Wale and Stonebwoy clashed on stage. They have since been banned from the award and their case is still in court.

Pardon Me, Sir, If It’s Alright To Legalise ‘Okada’, What About ‘Prostitution And Galamsey’?