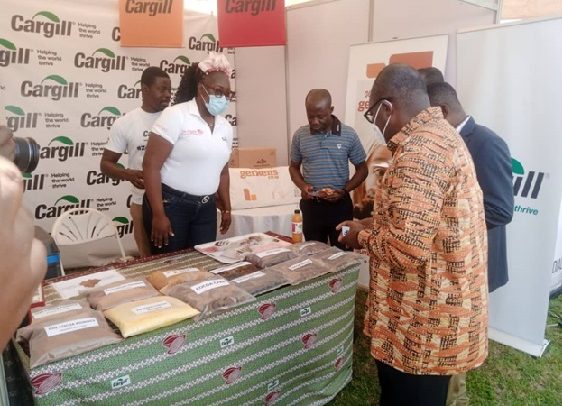 Officials of LMI Holdings inspecting some products of Cargill Ghana

The show brought together over 20 multi-sectoral light and heavy industries as well as manufacturing companies in the agro-processing, garment and textiles, pharmaceuticals, and the metal and plastic manufacturers, among others.

Koji B. Aduhene, Chief Executive Officer of LMI Holdings, explained that the idea was to encourage industrialisation and manufacturing in the country.

According to him, “The show is for tenants here to tell their own story and not anyone doing that for them because everyone has a story to tell.

“The trade show is just a start of the industrialisation story. We don’t want a situation where after the signing the African Continental Free Trade Agreement (AfCFTA) headquartered in Accra, Ghanaian companies will not be benefiting. We want Ghana to contribute and participate meaningfully and to do that, we’ve to have industrialisation hence this trade show to tell our story.”

Held at the Meridian Enclave of the Tema Freezone, he promised it will be massive next year at different location with close to 100 light and heavy industries coming together to showcase their products.

Dr. John-Hawkins Asiedu, Technical Advisor at the Ministry of Trade and Industry, who spoke on behalf of the Deputy Minister, Michael Okyere Baafi, appealed to the players in the industry to help government realise its industrialisation agenda of making Ghana the industrial hub of Africa.

He assured the industry players that government will continue to work hand-in-hand with the private sector to put in place the needed resources that would help in the development of special economic zones to breed massive industrial transformation for job creation, economic growth among others.

The Technical Advisor reiterated that the ministry, in line with the Industrial Transformation Agenda of the government, was collaborating with existing industrial park developers and other relevant stakeholders to achieve the desired objective of the agenda.

He noted that Government’s flagship policy of constructing industrial parks in each of the 16 regions of the country to aid industrialisation was seriously ongoing as government was aggressively collaborating with the World Bank and other development partners to develop the Greater Kumasi Industrial City to host both light and heavy industries, when completed.

Dr. Asiedu thanked management of LMI Holdings for organising such an event as part of their complementary role in the management of the Tema Free Zones Enclave and the building of the Dawa Industrial Park in Dawa for economic growth.

Attendees expressed gratitude to LMI Holdings about the opportunity given to them to showcase their products and network with people.