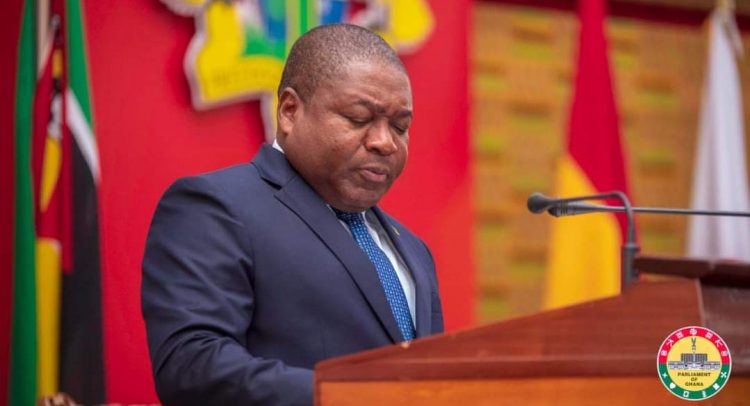 The Mozambican President, Mr. Filipe Jacinto Nyusi, has expressed concern about the low amount of trade opportunities between Ghana and Mozambique and has called for closer relations between the two countries for economic and political gains.

The Mozambican President said this when he addressed Parliament today, as part of activities marking his four-day visit to the country.

President Nyusi referred to the foundation laid by the first President of Ghana, Dr. Kwame Nkrumah for the political and economic independence of not only Ghana but other African countries as well. He added that it was that vision that helped to shape the early days of development in most African countries, and emphasized that countries like Mozambique benefited immensely from the examples of the ideals of the Osagyefo.

Commenting on President Nyusi’s speech the Minority Chief Whip, Hon. Mubarak Mohammed Muntaka narrated the struggle of Mozambique before independence and mentioned that their development is worthy of mention.

He noted that Ghana has a lot to learn about the Parliamentary Democracy in Mozambique.

The Majority Leader, Osei Kyei Mensah Bonsu assured the Mozambican President and his delegation that immediate steps will be taken to establish Ghana – Mozambique Parliamentary
relations to strengthen the relationship between the two countries.

President Nyusi was at the head of a twenty-member delegation to the country for a four-day state visit.