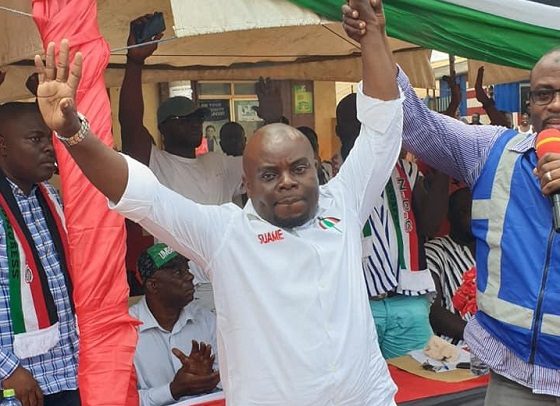 Francis Dodovi, being declared as the Suame NDC Parliamentary Candidate by the Electoral Commission (EC) officials

THE NATIONAL Democratic Congress (NDC) delegates in the Suame Constituency have overwhelmingly confirmed Francis Dodovi as their parliamentary candidate for the 2020 elections.

Dodovi was the only candidate for the Suame NDC parliamentary candidate position.He is a staunch member of the NDC in Ashanti Region, having served the party in different capacities, especially when the party was in power.

During an acclamation programme, supervised by officials of the Electoral Commission (EC) officials, the party delegates endorsed Dodovi to lead them to wrest the Suame seat from New Patriotic Party (NPP).

The ceremony, held on Saturday morning, was attended by the Ashanti Regional Chairman of the NDC, Nana Akwasi Andrews and other influential members of the opposition political party in the region.

Party stalwarts such as Alhaji Saani Abdulai, Regional first Vice Chairman, Alhassan, Regional Organizer, NDC parliamentary candidates from other constituencies and other party people were present at the event.

Dodovi, in his acceptance speech, said he would campaign vigorously to help snatch the Suame seat from the ruling NPP in 2020, saying “it is the end of the road for Osei Kyei Mensah Bonsu and the NPP”.

He said the Suame Constituency, especially the Suame Magazine, had retarded in growth over the years due to poor leadership “and incoming President Mahama and new Suame MP for 2021, Dodovi, will bring the needed transformation”.