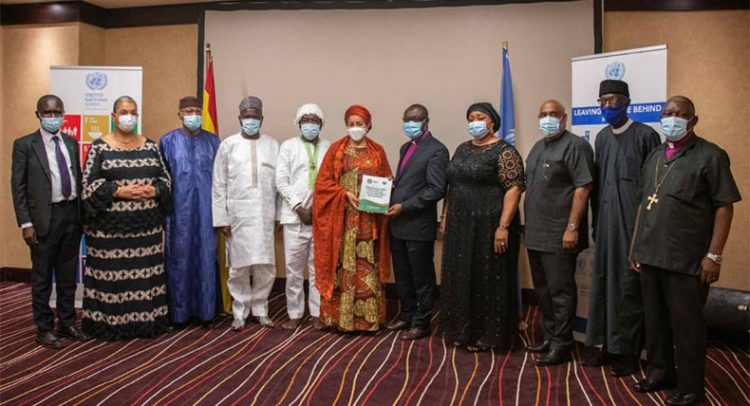 DGS Amina Mohammed (middle) with members of the NPC

The United Nations Deputy Secretary-General (DSG), Amina J. Mohammed, has urged the country to continue on the track of organizing free and fair elections.

She said it was important for an election to be peaceful, transparent, inclusive and credible and administered by strong, confident and reliable electoral institutions.

She made the observation during her recent visit to Ghana when she met with the Electoral Commission (EC) and the National Peace Council (NPC), in Accra.

During the meeting with the 6-member delegation of the NPC, led by its newly appointed Chairperson, Rev. Dr. Ernest Adu-Gyamfi, the DSG said “the enthusiasm and expectations of stakeholders and the people of Ghana are very high and [their] voice in keeping the peace is critical to ensuring peaceful elections”.

She stated that in a sub-region with increasing conflict, the NPC’s role was crucial for the sustenance of peace in the country and by extension in West Africa and on the continent.

Ms Mahammed commended the EC on its preparedness but called on the electoral body to continue dialoguing with key stakeholders to create an inclusive and conducive environment for holding elections.

She also shared the idea of creating a “Youth Situation Room” in order to involve the youth in disseminating accurate and reliable information on the electoral process via social media.

The EC Chairperson, Jean Mensa, highlighted a number of significant achievements and challenges encountered and how the EC has responded and addressed those challenges, citing transparency, regular updates on the Commission’s preparations towards the elections, and immediate response to complaints as the hallmark to ease tensions around the elections.

She informed the DSG that, with three weeks to go for the December elections, the EC is 97% ready and does not foresee any setback.

The NPC also presented a report on Eradicating Political Vigilantism in Ghana to the DSG and shared its ongoing efforts to promote peaceful elections and assist in defusing tensions at different levels such as creating awareness on the Vigilantism and Related Offenses Act, 2019 (Act 999).