Abandoned Eastern Corridor To Be Revived 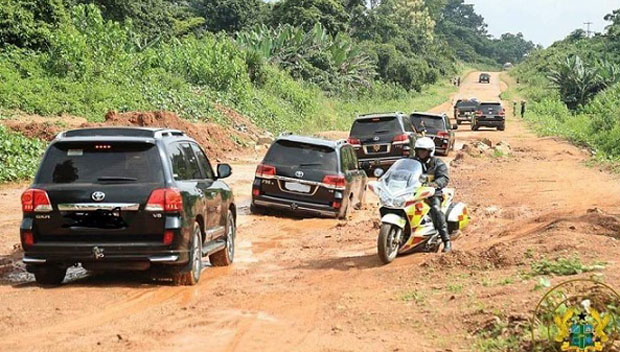 People living in the Volta and Oti regions, particularly those along the Eastern Corridor road, will soon heave a sigh of relief as the abandoned road is expected to be revived in a few weeks.

Information reaching DAILY GUIDE indicates that work will soon commence on the Hohoe-Jasikan-Dodi Pepesu and Nkwanta-Kpassa-Damanko portions of the road which are in a deplorable state.

The Volta Regional Communications Director of the New Patriotic Party (NPP), Enoch Amegbletor, made the revelation when he reacted to concerns raised by some road users and residents, especially the Overlord of Kpassa in the Nkwanta North District of the Oti Region.

The Paramount Chief of Kpassa, Ubor Tassan Konja VI, speaking at the coronation of the sub chief for the Charbobo community, lamented bitterly about the bad state of the road and the failure of government to develop the Nkwanta North District after several promises. The newly installed sub chief is Ubor Jinjirr Major Jonathan.

According to the Kpassa Chief, the deplorable state of the road has become a security issue as it threatens the lives of his people and those living along the stretch in the Volta and Oti regions.

Referring to the Nkwanta-Kpassa-Damanko road, he wondered why the road which is a portion of the Eastern Corridor road that links southern Ghana to the north and Burkina Faso had been abandoned to a level causing lives and businesses to hang in a balance.

Some residents, traders, drivers and other road users corroborated the concerns of the chief and reiterated that the road was killing their businesses, affecting their health and also making the area unattractive to investors.

China Jiangxi International Corporation, a Chinese Construction firm, was awarded 50 kilometres out of the 62 kilometres Nkwanta-Kpassa-Damanko road in 2011 expected to be completed in 2013.

For the last eight years, the road which forms part of Lot 4 of the Eastern Corridor road had seen about 25% of work done with five kilometres of the stretch asphalted and u-drains constructed at some sections. The Hohoe to Jasikan section can be described as a death trap.

Responding to these concerns, Mr. Amegbletor noted that some portions of the Eastern Corridor road had been captured among the list of projects to be undertaken under the $2 billion Sinohydro deal.

Key among them is the 66-kilometre Hohoe-Jasikan-Dodo Pepesu road of the Eastern Corridor road.

Apart from that, all abandoned portions are being repackaged for funding, which has been the major obstacle of the road over the years.

He said the President would himself commission the new contracts in a few weeks, while the old contracts being revived by the roads and highways ministry and the finance ministry would also see massive work, this year.

Cop In Cooler For Rape