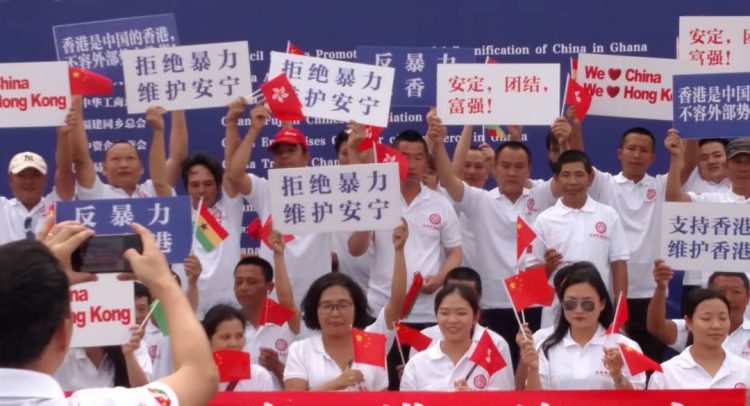 The Chinese community in Ghana has condemned ongoing violence in Hong Kong.

Members of the community led by the Chinese Ambassador to Ghana rallied at the Sentuo Ceramic factory in Tema yesterday, to register their displeasure over happenings in Hong Kong, and to call for an end to the violence which has been going on for about two months.

They included Chinese traders, diplomats and servicemen and women.

The rally was organized by the Council for the Peaceful Reunification of China in Ghana, together with the representatives from all the Chinese associations, Chinese enterprises and business community in Ghana.

They voiced “no secession, no violence” in Hong Kong, faulting the Western Media including the BBC and CNN for ‘misleading’ the world on happenings in Hong Kong.

The Chinese Ambassador to Ghana, Shi Ting Wang, said at a press conference that BBC and CNN, among others, had been reporting selectively. He urged that the protest should stop.

He said Chinese would not allow anyone to challenge “One Country, Two Systems”, and urged that “the foreign forces must stop interfering in Hong Kong’s affairs.”

He alleged that “evidence shows that the situation in Hong Kong would not have deteriorated so much had it not been for the interference and incitement of foreign forces,” warning “I want to reiterate here that Hong Kong is part of China; no foreign country should interfere in Hong Kong affairs.”

“This is precisely the objective of today’s gathering which is organized by the Council for the Peaceful Reunification of China in Ghana together with the representatives from all the Chinese associations, Chinese enterprises and business community in Ghana to voice our support and concern,” he said.

He disclosed that unremitting efforts had been made by the Chinese Central government and the HKSAR government.

At the same time, according to him, some international media and people were disregarding the facts or making what he termed as ‘Selective Blindness’ and spreading ‘irresponsible remarks.’

The ambassador lamented that “they are also preventing the international community to understand objectively Hong Kong’s violent and illegal activities.”

For the past two months, violent demonstrations and riots in the Hong Kong Special Administrative Region (HKSAR) of the People’s Republic of China had attracted global attention.

The problem in Hong Kong started with the HKSAR government’s intention to revise the Fugitive Offenders Ordinance (Extradition Bill) between China, Macau and Taiwan, and later announced that the revision would be stopped but the violence did not stop.