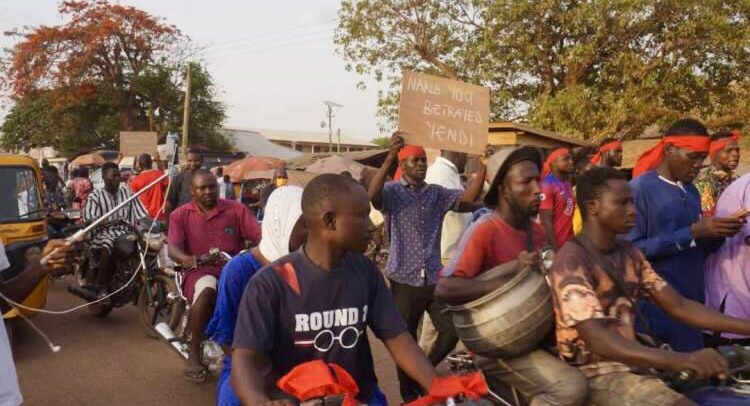 The Youth of Yendi in the Northern region are peeved over the exclusion of Member of Parliament, Alhaji Farouk Aliu Mahama in the list of deputy ministerial nominees to be announced by President Akufo-Addo.

Hundred of rampaging youth in the constituency on Thursday evening, hit the streets of the municipality burning of car tyres to register their displeasure.

Addressing a press conference on Friday, 16th April, a Group calling itself Aggrieved Youth of Yendi have called on the President to consider the son of late former Vice President for ministerial appointment in his second term in office.

According to them, Mr Farouk Mahama merits a substantive ministerial appointment for his contribution to the victory of the party and many developmental interventions in the constituency.

“Ladies and Gentlemen, friends of the media, we the good people of Yendi expected our “Talk and Do” MP would have been given a substantive ministerial appointment and that was rather unfortunate, but we hope and pray that, the president of the authority will surely come to the aid and listen to the cry of the good people of Yendi, Yendi the capital of Dgbang, Yendi where the Overlord (Yaa-Naa) is sitted and conferred a deputy ministerial appointment to our dear MP as he is a ladder for many to climb, the Group stated.

Alhaji Farouk Mahama won the Yendi seat in the December polls with the highest number of votes for both presidential and parliamentary in the five (5) Northern regions.

However, the Group argued that Yendi has been loyal and a safe seat for the ruling New Patriotic Party just like Bantama and Manhyia constituencies in the Ashanti region.

They are therefore calling on President Akufo-Addo to reward Yendi with a ministerial for overwhelmingly endorsing his second term in office and loyalty to the NPP.

“Mr. president, just as the Manhyia constituencyn in the Ashanti Region which cannot be neglected in the NPP administration, Yendi which is the heart of the NPP in the five northern Regions should not also be tipped off.

“Mr. president, Hon. Alhaji Farouk Aliu Mahama your son has demonstrated a good sense of [hardwork] in the entire northern region just as his late father Alhaji AliuMahama former vice president of blessed memory used to do,” the Group stressed.