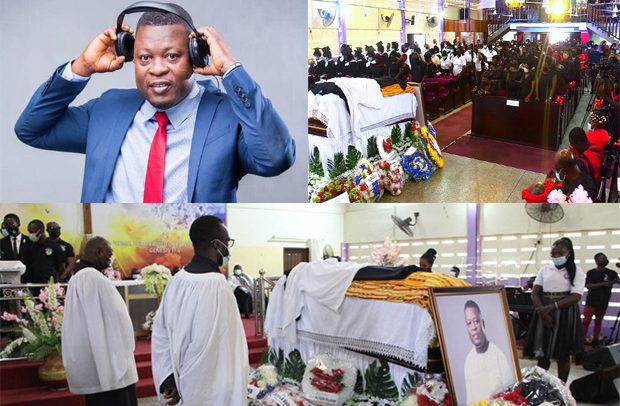 Scenes from the funeral

The mortal remains of Happy FM presenter De-Graft Danquah, popularly known as DJ Advicer, who died on March 4 at the 37 Military Hospital in Accra after a short illness, was laid to rest last Saturday in his hometown, Ekumfi Srafa Mpoano in the Central Region.

The final funeral rites of the late radio presenter, which was held at the Prisons Interdenominational Church, Cantoments, Accra, attracted people from all walks of life.

It was an emotional sight as family and friends found it difficult to come to terms with the fact that their beloved radio presenter was no more.

Some of the music stakeholders, including friends, could not hold on to their emotions but broke down in tears as they filed pass the mortal remains.

Paying tribute to her late husband, Ida De-Graft Danquah highlighted on the love, discipline and overall kind heart of her beloved whom she will forever miss.
“You were indeed an easy person to talk to, open-minded and a big-hearted gentleman. You made living with you very natural and comfortable.

“You captivated me with your intelligence and wisdom, your vast experience, remarkable humility by no means least, your sense of humour. You were too generous and kind, just an example among many others,” she read amidst tears.

The Global Media Alliance Group was not left out as the workplace was the late DJ Advicer’s second home. Leading the charge was Group Chief Executive Officer, Ernest Boateng, who was also a friend to the deceased. He admitted that the Group was yet to come to terms with DJ Advicer’s death.

Having known DJ Advicer for over a decade, the CEO described him (Advicer) as a wonderful person to experience, and a vibrant soul who had a big heart to accommodate all.

The SANTA ’97 (Adisadel College old boys) year group, which recognised DJ Advicer as a pillar of the group, pledged to keep his name inscribed
on the indelible walls of the Santa ’97 fame.

DJ Advicer was one of Ghana’s celebrated radio presenters and DJ noted for promoting young talents in the music industry on his programme.

He was the host of Happy FM’s Ayekoo after Drive; which runs every weekday from 6pm-9pm.

The late DJ also picked up the award for the ‘Best Afrobeat/Hiplife DJ of the Year’ on the night and has over two decades of experience in the DJ profession.

FC Barcelona, one of the Founding Clubs of the new Super league