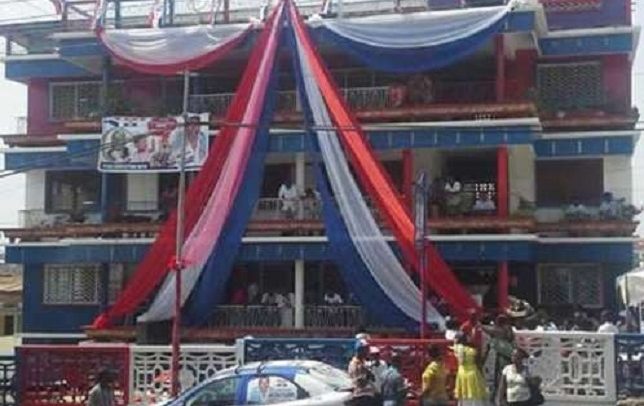 The NPP Regional Office in Kumasi

ALL ACTIVITIES at the New Patriotic Party (NPP) Ashanti Regional Office at Krofrom in Kumasi, came to a halt on Friday as the landlady of a house, serving as the NPP regional office, threatened to eject the party.

According to reports, the ruling political party in the region, chaired by the maverick Bernard Antwi Boasiako aka ‘Wontumi’, owe the landlady three years and two months rent, totaling GH¢36,000.

The landlady and her children have done their utmost best to retrieve the money from Wontumi, who rented the house for the party but to no avail, and it is compelling the angry landlady to eject the party from her house.

On Friday, November 18, 2021, an important party activity was said to be taking place in the party office when the landlady and her children, stormed the place and ordered the NPP to vacate the house with immediate effect.

The action of the landlady and her children interrupted the party activity and the party members were ordered to vacate the property.

The owner then threatened to close down the office which is a two-storey building situated on the Ash Town to Krofrom road and painted with red, white and blue colours of the NPP, if the NPP failed to settle the huge rent debt.

As a result, some TESCON members that were having a programme at the party office were forced to leave the place and relocate to a private facility, close to the party office, to continue with their programme.

The landlady, reportedly, complained that the NPP owe her a whopping GH¢36,000, representing three years and two months of rent. The party is supposed to pay GH¢1,000 monthly to the landlady per the rent agreement, the paper learnt.

According to her, aside the non-payment of rent, the NPP, especially Wontumi, has reportedly also failed to respect the contractual terms of the rent agreement, as the house has not seen any maintenance works for some years now.

Again, the landlady complained bitterly that Wontumi has failed to sit down with her to discuss a possible upward adjustment of the rent as agreed in the contract when the house was let out to Wontumi and the NPP about eight years ago.

The landlady stated that she had realised that the NPP, especially Wontumi, who led the discussions for the rent for the NPP, were shortchanging her.

Meanwhile, Sam Pyne, Kumasi Mayor and immediate past Ashanti Regional Organiser, has debunked reports that the party owes the landlady.

The NPP, he said, has made all the necessary payments to the landlady, and said there is no iota of truth in the rumours being spread around.

On the lack of maintenance of the building, he said the party had already engaged a contractor to work on the building.

Wontumi, it would be recalled, whilst campaigning to become the Ashanti Regional NPP chairman for the first time in 2013, promised to build a modern party office that befits the status of the NPP in Kumasi.

Instead of building a party office, he and his team however, ended up renting a two-storey building at Krofrom in the Manhyia South Constituency for ten years for the party. Sources said the rent period would come to an end in 2023.