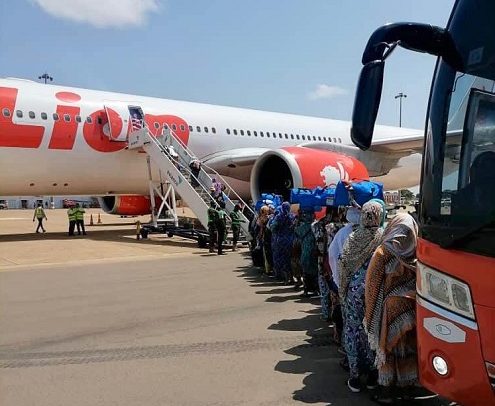 The last batch of pilgrims from Tamale are now in Saudi Arabia, thus ending that chapter of Hajj 2022.

The pilgrims were flown to the city of Medina from where they proceeded by bus to Mecca to start the rituals.

An official of the Ghana Hajj Board (GHB), part of the team working in Tamale, told the DAILY GUIDE that “so far the operations have been smooth with negligible hitches.”

“The aircraft, when it lands at the Tamale International Airport, spends some two hours before takeoff,” the official added.

With the Tamale end of the operations now completed, the attention shifts to Accra where three flights are scheduled to convey pilgrims to Medina.

The Tamale operation saw top officials like the Director of Finance of the GHB, Alhaji Farouk Hamza and Alhaji Sumaila, the Operations Manager pitching camp there.

They are heading for Accra to commence preparation for the next batch of flights of pilgrims from Kumasi, Accra and surrounding southern regions of the country.

The excitement has started building among prospective pilgrims, with the curtains now drawn over the Tamale operations.

The Hajj Village is now a beehive of activities, with pilgrim agents and prospective pilgrims including supporting staff all busy with their various chores.

Sellers of assortment of wares have also displayed their wares, the feature of the Hajj Village during such seasons.