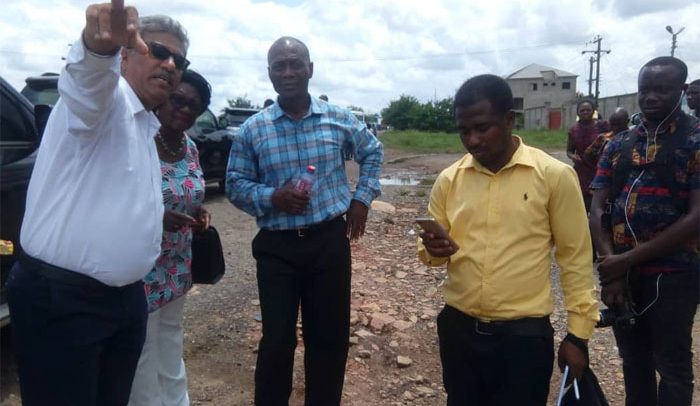 About 40 houses at Havana within the Kpone Katamanso Constituency in the Greater Accra Region are expected to be demolished in the coming days to pave way for the continuation of the Tema-Mpakadan railway project.

This came to light when the Minister of Railways Development, Joe Ghartey, toured the line on Wednesday May 15, 2019.

The Minister’s visit to the line in the company of journalists was to inspect progress of work done so far.

Contractors for the 99 kilometers track, AFCONS Infrastructure Limited, an Indian firm, told the Minister and the press that completing the project would require the demolition of the houses along the route.

General Manager of AFCONS Infrastructure Limited, Udai Veer Singh, briefed the Minister that some houses have already been marked for demolition.

He says where the demolitions are to take place were a within kilometers along the railway line from Tema Harbour.

The Tema Development Corporation (TDC) has reportedly indicated that it did not issue building permits for the houses along the line.

However, some residents are arguing that they got permits from TDC.

Issues of compensation are being raised but the Ghana Railway Development Corporation says there would be no compensation.

DGN Online gathered from a deep-throat source at the Railways Development Ministry that the demolition exercise would commence next week.

The Tema line was initially supposed to end at Akosombo.

But it was increased from 85 kilometers to 99 kilometers, extending to Mpakadan in the Volta Region, with the aim of protecting the Akosombo Hydroelectric dam.

Mr. Ghartey told DGN Online that his outfit has written to the Finance Ministry to make provision for the extra cost being incurred as a result of the expansion of the line.

The contractors have also indicated that the line would be completed by June 2020.