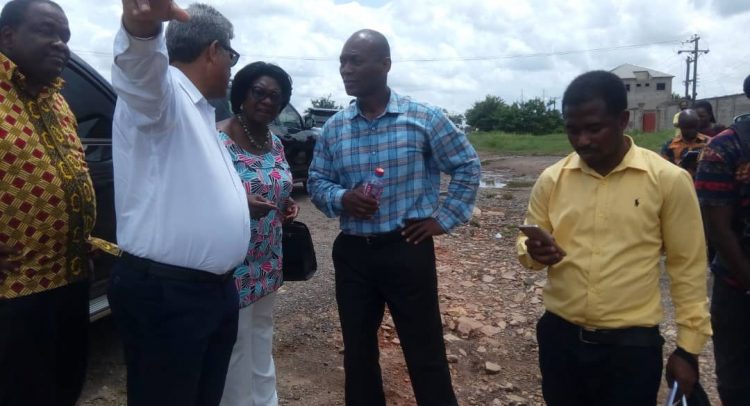 THE MINISTRY of Railways Development has acquired new lands for the Tema-Mpakadan railway project.

The new lands stretch from Afienya in the Greater Accra Region to Mpakadan in the Volta Region.

Deputy Chief Executive Officer (CEO) of the Ghana Railway Development Authority (GRDA), Yaw Owusu, made the disclosure on Wednesday May 15, 2019, when the Minister of Railways Development, Joe Ghartey, inspected the project.

Mr. Owusu told DGN Online in an interview on the sidelines of the tour that the acquisition of the lands would ensure that residential and commercial properties are 100 feet away from the track.

But it comes with three different compensation payments by the state to the owners of the lands, structures along the track and some farms.

Mr. Owusu says the state has to pay compensations for lands, structures and crops.

Already, he says, Government was paying a Gh¢ 750,000 compensation to crops owners with farms situated between kilometers 24 and 68 of the railway line.

He says the new lands have been acquired from kilometers 23.90 to 90 of the Tema-Mpakadan railway project.

Mr. Owusu could not give the total acres of lands acquired so far.

The Tema line was initially supposed to end at Akosombo.

But it was increased from 85 kilometers to 99 kilometers, extending to Mpakadan in the Volta Region, with the aim of protecting the Akosombo Hydroelectric dam.

Mr. Ghartey told DGN Online that his outfit has written to the Finance Ministry to make provision for the extra cost being incurred as a result of the expansion of the line.

The contractors have also indicated that the line would be completed by June 2020.