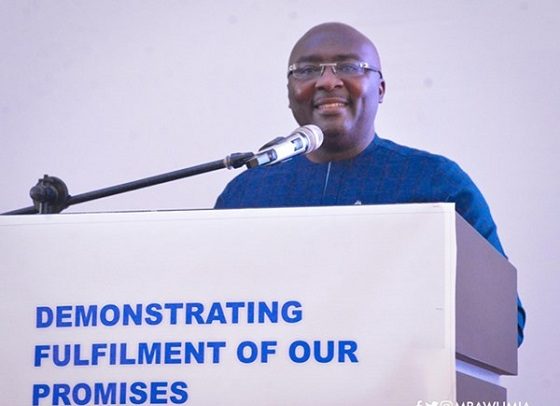 Vice-President Mahamudu Bawumia had cause to flaunt the achievements of the NPP government the way he did in this year’s chapter of the Town Hall series. He and his boss the President ? with the support of government appointees ? have achieved close to 80 per cent of what they set out to achieve because they are tangible and can be verified with ease.

For the intangible feats, they are shrouded in figures as contained in records.

The Town Hall meetings have become important features of government calendar and rightly so. In a country where the opposition has become synonymous with mischief and trading of lies steeped in propaganda, such engagements are necessary.

With social media and some media establishments friendly to their propaganda cause providing them with an impetus they continue to throw dust into the eyes of the gullible.

A government which has failed to deliver on their promises cannot look the citizenry in the face the way the Number Two Gentleman did in Kumasi. ‘We said we would do A, B and C. We did it. Go and verify’ can only be done by a sincere political leadership which abhors propaganda.

Opposition National Democratic Congress (NDC) Allotey Jacobs who was so mesmerized by the sheer beauty of the presentation, and of course, the sincerity therein could only doff his hat for the Vice-President and by extension the NPP government.

We wish his testimonial for the Vice-President can be regarded as representing the view of his party so we can headline it thus ‘NDC Doffs Hat For Bawumia’.

For a party whose cornerstone is constantly opposing policies originating from the other side of the political divide, they can easily describe Allotey Jacobs as a turncoat and therefore a fair game for verbal attacks.

Facts and figures not insults are ingredients for convincing arguments. The question that we as Ghanaians should pose when the NDC come insulting their opponents as they have always done is whether or not the NPP government have executed the projects they promised to do or not.

Has the previously uncontrollable cedi depreciation against the dollar been achieved or not? Are infrastructural developments not being executed or not? Is the Free SHS ongoing or not?

Has the ship of state which in previous times listed dangerously on choppy waters not been steadied or not?

A standard for measuring government performance has been established and this in future shall remain the benchmark.

The Vice-President only presented what his government has achieved and so opposition elements who hold contrary opinions should say so with facts and figures.

For a government able to turn around an ailing economy within their first term shy of ten months, they deserve a round of applause and another term especially when the opposition does not present a convincing alternative for now.