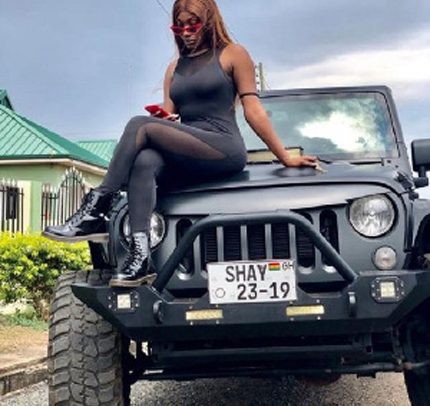 Wendy Shay with her Jeep Wrangler

Musician Wendy Shay on Monday was heavily trolled on Twitter for allegedly using a fake number plate on a new Jeep Wrangler she allegedly bought for herself.

Earlier reports indicated that the Jeep Wrangler belongs to the ‘Uber Driver’ crooner, and she was seen driving it in town.

It is, however, the new Jeep Wrangler’s customised number plate ?‘SHAY 23-19 ? that has become Wendy’s headache.

Reports claimed the number plate “is fake”, and most social media users even challenged the ownership of the Jeep.

Wendy on Monday trended on Twitter over the alleged fake number plate and the vehicle. A number of Ghanaian Twitter users commented on the issue. While others defended her, a number of them also made fun of her.

But Wendy seemed unruffled about the name-calling.

“Trendy Wendy (laughs) #ashewooo,” she tweeted on Monday in what looked like she was responding to her critics.

NEWS-ONE’s checks with the Driver & Vehicle Licensing Authority (DVLA) indicated that the number is actually registered.

A reliable source at the DVLA revealed that she was at the DVLA last week to get the registered number plate.

Wendy has always trended on social media for the wrong reasons.

She was last in the trends for saying she would check online to know her net worth after she was asked on TV Africa about her net worth.

Her response triggered criticisms and attacks from a section of the public.

Late last year, she generated backlash after she described a question posed to her by Joy News’ MzGee as “dumb”.

In July this year, the singer, who is an ambassador for the Youth Employment Agency (YEA), rendered an unqualified apology for also posting a picture that subjected ex-President John Agyekum Kufuor to public ridicule.