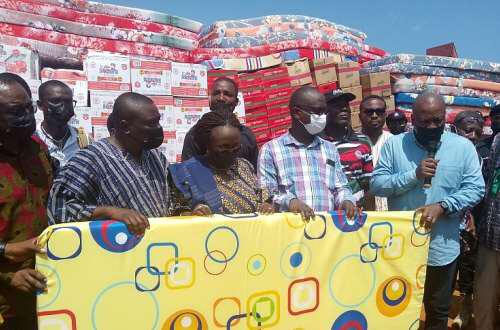 The New Patriotic Party(NPP) in the Savannah region has asked former President John Dramani Mahama to apologize to the people of Gonjaland for neglecting them during their time of difficulty but rather donating to the people of the Keta tidal wave incident.

Former President John Mahama supported Keta residents who were hit by a tidal wave on November 7, 2021, which destroyed several properties and rendered many homeless.

The Savannah Regional NPP is demanding that a similar consignment as donated to the good people of Keta or more is sent to the victims of this year’s disaster in the Savannah region in earnest.

“We have done enough for former President Mahama and his NDC and therefore also deserve the goodies he is giving out to others. He must do to us what he’s preaching to others to do to the people of Keta.”

“More than 5,000 residents were affected. Our brother who comes across today as one sympathetic being never showed up. He never also came to his people with a penny. This year as well, residents of Bole District(the home of Mr. Mahama’s biological father); Nsunua, Tenyekura, Dakrupe, Ntereso, Chibrinyou, Agblekame, Bole, Mempeasem, Bole Choribang, Jama nsunua were hugely flooded. In Sawla Tuna Kalba; Bawuriyiri, Gbegu, Weigu-Kura, Samanbo, Siekura, Kulwong, Kawie, and Dinie were equally affected. The road from the hometown of former President Mahama’s biological mother, Busunu-Daboya was cut-off. Indeed, this was a road that he dashed to his biological brother but the poor job contributed hugely to that disaster. He never came down with a penny as, neither did he come down with a grain of rice.”

According to Mr. Issah, more than 7,000 residents were affected directly in this case, yet Mr. Mahama never thought it wise to visit any of these towns nor donate a pesewa to them but rather thought it wise to sympathize with the residents of Keta and went ahead to donate trailer loads of items and significant cash to them.

The Director of Communications, Savannah Regional NPP, admonished former President John Dramani Mahama and the NDC to desist from their incurable desire to run to town with petty partisan propaganda.