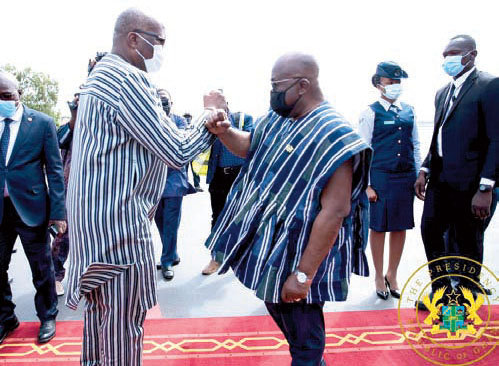 President Akufo-Addo has given the government and people of Burkina Faso an assurance of the support of the Economic Community of West African States (ECOWAS), as the country fights terrorist attacks.

The President gave the assurance in his capacity as the Chairperson of the Authority of Heads of States and Government of the ECOWAS when he visited Ouagadougou yesterday to empathise with them after the recent terrorist attack which claimed over 160 lives.

The regional bloc, he said, will stand with the government and people of Burkina Faso to win the fight against terrorism and violent extremism, which the country has countenanced in the past few years.

While commiserating with his host President Roch Marc Christian Kabore in Ouagadougou yesterday, he said that terrorism must be defeated in West Africa so the peoples of the sub-region can live in peace, freedom, progress and prosperity.

Acknowledging the fact that the fight against terrorism must be a collective one, the President said it behooves the ECOWAS to pull together and come to the aid of frontline countries on the radar of the terrorists such as Burkina Faso, Niger and Mali.

When the ECOWAS Summit holds it session on June 19, 2021,  President Akufo-Addo said there will be a firm resolution by Member States to implement a comprehensive line of action to effectively deal with the scourge of terrorism even as they seek reforms to the organisation.

He used the opportunity to assure Burkina Faso of Ghana’s commitment to tightening the bond of friendship existing between the two countries in areas such as infrastructural development, railways development, and agriculture, for the mutual benefit of their respective peoples.

President Kabore lauded President Akufo-Addo, the Ghanaian people, and, indeed, the people of the ECOWAS Community for the solidarity shown to the Burkinabe people in these difficult times.

With countries such as Mali, Burkina Faso, Niger, Nigeria and Cote d’Ivoire, in recent times, bearing the brunt of terrorism and violent extremism, it is important that countries in West Africa rally behind each other to defeat the menace.

The Burkinabe President stressed that it is only West Africans, working together, that can defeat terrorism, and, thus, lent his support to his Ghanaian counterpart’s call for ECOWAS to take the lead in the fight against terrorism.

President Akufo-Addo has since returned home.