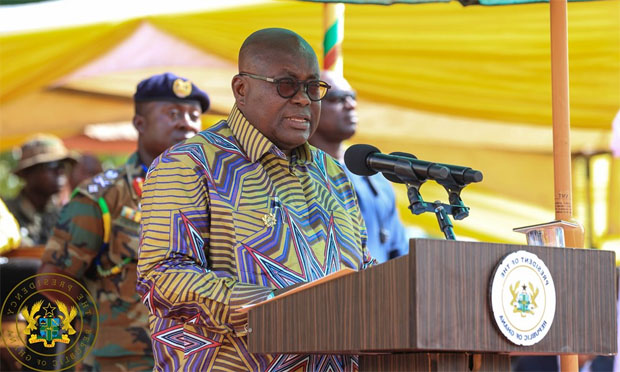 President Nana Addo Dankwa Akufo-Addo has debunked claims by the opposition National Democratic Congress (NDC) that he is giving free water and electricity in an attempt to win power in December.

He said in Koforidua during his Eastern Regional tour which commenced yesterday that giving out free water and electricity for a period of six months is not to win votes but rather to lift some burdens off the ordinary Ghanaian as Covid-19 continues to take a toll on the economy.

According to him, his government deemed it necessary to take out some loads from the heads of Ghanaians during these difficult times.

He said, “A caring government is a government when things become difficult for his people will step in because of good policies and efficient management to be able to protect the people and that’s what we have done.”

He explained that his administration had revived the National Health Insurance Scheme which was practically worthless at the time he assumed office because it was not serving its purpose.

To him, well effective measures put in place had brought the NHIS back to life and every citizen is benefitting from the scheme.

“The NHIS card was virtually worthless at the time I gained power but now people are using it in hospitals to cater for their medication,” he said.

President Akufo-Addo said the challenges facing the ordinary Ghanaians are his main focus and the building of a robust economy is the only sure way to make the nation great and better.

He said “as the head of the New Patriotic Party government, we will continue to provide the needs of the people. Constantly, the things that matter to the local people in the community are what the government is ready to resolve.”

The President cut sod for the commencement of some major projects in the regional capital, including a drainage system.

The Minister for Local Government and Rural Development, Hajia Alima Mahama, who is with the President, said the construction of the drainage was a great project that would help the residents of Nsukwao since the area had experienced heavy flooding for a long time.

“The Nsukwao dam is a key project that has caught our attention, the people of Nsukwao have suffered great floods and recorded highest flood incidents,” she added.