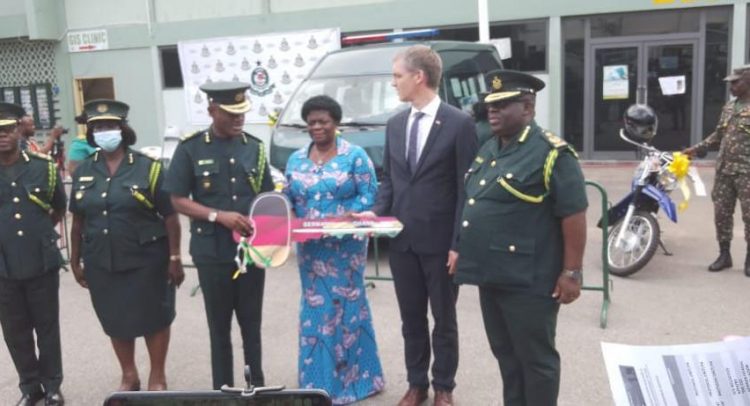 The German Embassy has donated a 16 seater urvan bus and a Yamaha AG-125 motorbike to the Document Fraud Expertise Centre (DFEC) of the Ghana Immigration Service (GIS).

Speaking at the handing over ceremony at the headquarters of the GIS in Accra yesterday, the Comptroller General of the GIS, Kwame Asua Takyi,  commended the German Government for their support and consistency. The Government of Ghana, he said, views their support as critical in the management of border security, as the service is poised to fight terrorism and cross border crimes at the various borders.

He said, “The current development along the borders of West African countries brings to the fore the need for more commitment and vigilance by the security and intelligence agencies to deal with undesirable elements who may want to enter the country to attack installations and the citizens.”

According to him, the support by the German Government forms part of the campaign launched by the Ministry of National Security to fight violent extremism.

“I am very confident that the donation will boost the morale of officers at DFED to deliver swift response to examine travel document from the various border post,” he said.

Deputy Head of Missions of the German Embassy, Hans-Helge Sander, who made the donations on behalf of the ambassador, said though Germany over the years has supported GIS in building capacity, it will continue to do so.

He said the support is also in fulfilment of a request by President Akufo-Addo earlier this year to the European Union, for support in combating a spillover from the Sahel.

He noted, “All EU member states agreed that this should be done through projects and through individual states, and we see ourselves here spearheading this effort.”

He said, as one of the biggest financial contributor to EU, Germany is substantially involved in all EU projects implemented in Ghana for several years, which would continue in a lasting relationship with the Government of Ghana.

Dirk Kattlun, Police Liaison Officer of the Federal Police of Germany, on his part, said although the German Interior Ministry had cut funding for international cooperation this year, for the first time the German Government will establish one of the biggest vehicle service points in Tamale as part of their cooperation with Ghana.

Speaking on behalf of the Minister of the Interior, Chief Director, Mrs. Adelaide Annor Kumi, expressed gratitude for the cooperation between German Federal Police and the Ghana Immigration Service.

“It is an extremely important cooperation that must be encouraged at all times for both countries, for our mutual benefit,” she said.

‘I Am Not Worried About Awards Snub’