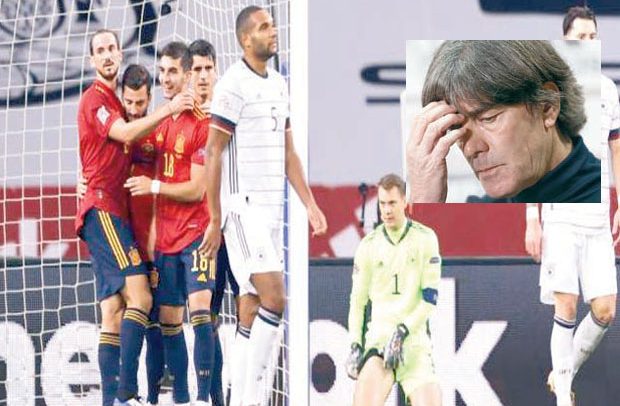 The painful post-mortem has started in Germany after Spain destroyed them 6-0 on Tuesday night with the country’s biggest paper, ‘Bild’, calling for Joachim Low to resign.

Giants of the international game and usually the ones dishing out the heavy beatings, this time, Low’s side, were on the receiving end and the press back home had been merciless in their assessment of the drubbing.

‘Bild’sports chief, Matthias Brugelmann, said that Low should offer his resignation from the position.

The publication tore into the team and wrote, “Low is wobbling after the disaster,” adding that they were “bodiless, defenseless and without a chance.”

Low has been at the helm for 14 years and led the country to World Cup glory in 2014 before embarking on a rebuilding job after the ignominy of the 2018 tournament. ‘Bild’was in good company in their savage assessment of Tuesday’s display.

Frankfurter Allgemeine Zeitung wrote that the German national team “had experienced a disaster” and now says Low “faces a mess of a team” to sort out.

‘It was humiliation from the first to the last minute, and the biggest defeat of a DFB selection since 1931,” lamented Morgenpost.

Sueddeutsche branded it “the worst game in the era of the national coach.”

Spain had been on a three-match winless run going into the game and there were green shoots of optimism surrounding Germany.