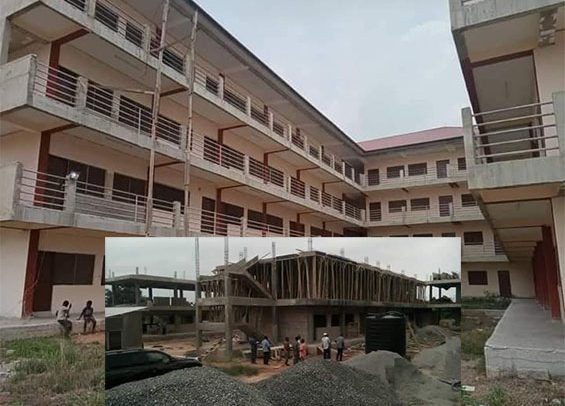 Current state of the school. INSERT: The state before NPP took over

Mr. Baako is one of the famous and frequent panelists on radio shows, popularly known for his good record keeping abilities and prowess in juxtaposing the achievements of past and current governments.

In a post sighted on his official Facebook page, Kweku Baako has exhibited his prowess once again after he pulled a long statement on the state of the alleged “abandoned” E-block building housing the SHS in Aflao.
According to him, it is hypocritical to describe the facility as an abandoned one because it is 96% complete and got to that level through the efforts of the current administration.

Kweku Baako in an attempt to solidify his argument gave a background detail on the project including the total cost to the nation and the contractors involved.

He also threw challenge to Communications from the other side of the political divide the NDC to challenge his conclusion and justify their propaganda.

The paramount chief of the Aflao traditional area, Torgbui Amenya Fiti has handed the government a four-month ultimatum to operationalize the E-block high school facility in his area.

The GH¢9 million project, which started under the erstwhile National Democratic Congress (NDC) administration, has 26 classrooms, five departments, and a science block.

However, Kweku Baako in his Facebook stated below:
“BRIEF REPORT ON THE CONSTRUCTION OF COMMUNITY DAY SENIOR HIGH SCHOOL (E-BLOCK) AT AGBLEKPUI, AFLAO IN THE KETU-SOUTH DISTRICT OF THE VOLTA REGION: LOT NO. CSHSP/P.11/VR03

*The Ministry of Education awarded Contract to Messrs. Globacom Limited in 2015 to construct 1No. 4 – Storey 24 – Unit Classroom Block with Science Laboratories and Toilet facilities (E-Block) and Ancillary External Works at a Contract Sum of GH₵8,030,372.15.

*The site was handed over to the Contractor for works to commence on 14th July 2015 for completion on 14th October 2016. The Construction Supervision Consultant is Lamda Consult Limited.

*Currently, the project is about 96% complete. The outstanding works includes final painting and clearing of site.

On 31st August 2021, the Consultant raised IPC No.7 in the sum of GHC24, 294.87. However, the Contractor disputed that based on capped fluctuations and payment of interest on delayed payment. The issue is being resolved between the Contractor and the Consultant, according impeachable official records!

He further stated below on how payments were made to the contractor by Nana Addo’s government on the project.

The Ministry of Education he said was working with the Contractor and the Consultant to resolve the issues around IPC No. 7. Meanwhile, steps are being taken to complete the outstanding works and hand over the project to the Client for operationalization.

“Me: As indicated, completion percentage now is 96%. The trajectory of commencement, construction and completion (the 3 Cs) clearly shows that the claim of ABANDONEMENT is UNSUSTAINABLE in this context. Those who challenge this assertion could provide evidence of the issuance of IPCs by the Consultant to contradict this conclusion and vindicate their assertion!” he concluded.

Torgbui Amenya Fiti, who was speaking during a courtesy call by members of the Minority on the Education Committee, said the government’s approach to education was appalling.

“The next place for revenue generation after the Tema Harbour is the Aflao border. So I had to push former President, John Mahama to put up that structure. I had to be running from here to Accra, begging. Should we be begging for education? If we have to beg for education before people can go to school, then I don’t know what we call democracy at all. Look at the structure, it’s almost 90 percent complete. The thieves are having a field day, going in there to have everything removed at will.”

“The NPP government now has free SHS education, but my people are not benefitting because there is no school here. So I am giving the Education Minister up till February for the school to be completed,” the chief charges.