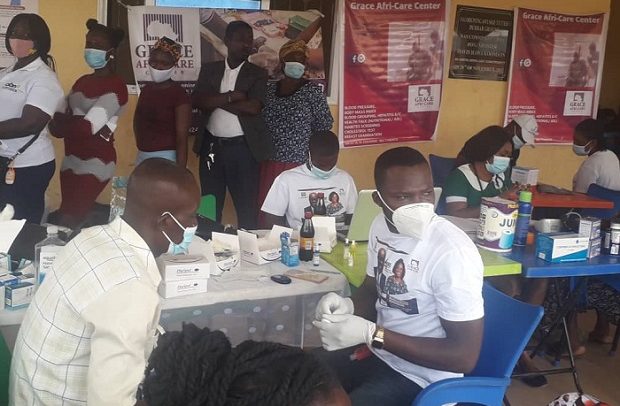 A section of beneficiaries being attended to at the event ground

The Massachusetts Chapter of the New Patriotic Party (NPP) has joined the campaign trail in the Awutu Senya East Constituency to have incumbent Member of Parliament (MP) HawaKoomson re-elected.

As part of its activities to prop the popularity of the MP, the United States of America (USA)-based group,organised a free National Health Insurance registration exercise and health screening to promote good health among some 2,000 voters in the constituency.

Screening was conducted forHepatitis B, Blood Pressure (BP) and sugar level at the four-day exercise which begun on Thursday.

NafisQuaye, an executive member of the group in an interview disclosed that the MP who is also the Minister of Special Development Initiativespaid regular visits to members of the chapter whenever she was in the USA.

“She would come to the US to seek for development initiatives for her constituency here in Ghana,” he said.

Her concern towards the plight of Ghanaians, he said, was an inspiration for the group to support the MP to retain her seat in the coming December elections.

He, therefore, called on Ghanaians to vote right by supporting the NPP as it seeks a second term in office under the leadership of Nana Akufo-Addo.

“The Free Senior High School (SHS) alone has eased the burden of many parents as no mother has to even sell her clothes anymore to educate their children,” he said.

He was hopeful that the Representation of the People’s Amendment Law (ROPAL) would be fully implemented in subsequent elections to allow for citizens in the diaspora conveniently practice their civic responsibility of electing their leaders.

“As Nana does his things, we know he will give us something that is going to be robust and secure. And as an Information Technology (IT) Consultant, I can see why it is delaying since the process was likely to be digitalised,” he said.

A beneficiary of the exercise, Elizabeth Antwi, in an interview also expressed her gratitude to the NPP party for such an initiative which has eased the financial burden associated with the registration process and screening.