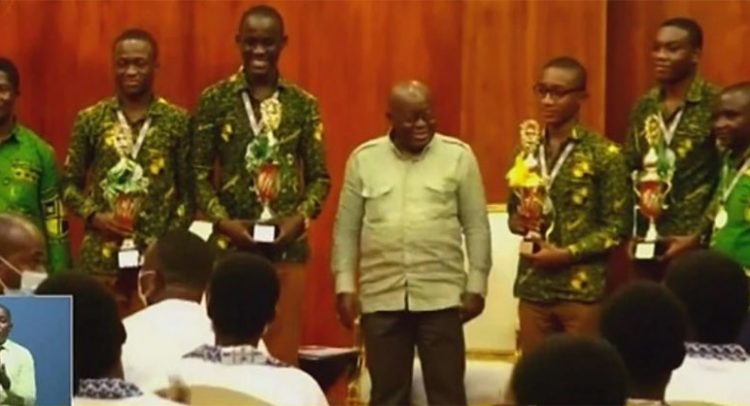 This was when students from both schools who participated in the two separate competitions called on him at the presidency on Monday to present their trophies to him.

The President expressed the belief that the youngsters have the power to change Ghana through their mastery of artificial intelligence.

The Robotics team from Prempeh College, were crowned champions of this year’s Robofest World Championship which was held virtually due to the COVID-19 pandemic.

The Prempeh College team which was among the six representatives from Ghana, beat 21 other contenders in the senior game GolfBowl.

In all, thirteen (13) second year students in the robotic club, participated and emerged winners of the World Robotics and Coding Competition also organised virtually by Intelik/Robogroup from the USA and Israel as a result of the COVID-19 pandemic.

He believes artificial intelligence (AI), is the surest way to a future of greatness and prosperity for the country when well tapped.

This, the President says, is evident in the story of Silicon Valley which has changed the way the world works.

“The people who begun Silicon Valley were very young people at the time, not much older than you are and they have changed the way our world works. So you have it in your power also to come and change the way Ghana works and change it for the better,” he said.

The participating teams were tasked to design, construct, and program their robots to act independently and compete for trophies in a variety of competitions.

MomaGolf and CMOS represented Ghana in the junior GolfBowl game while all Prempeh College teams took part in the Senior Game. PSIBOT was engaged in the senior Unknown Mission Challenge (UMC).

Who Is Obsessed By A National Cathedral?