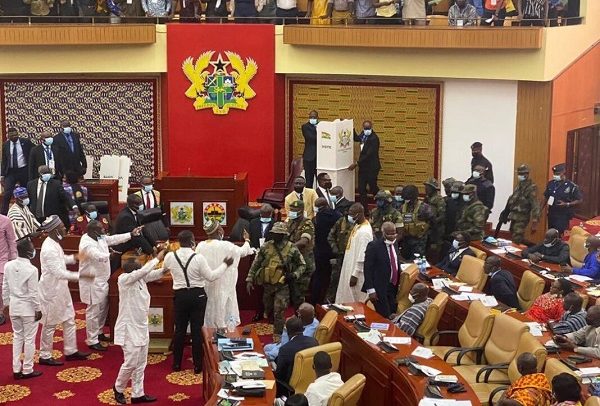 “The electoral system in the United States is archaic, it does not meet modern democratic standards…”

THE PANDEMONIUM that broke out in Ghana’s Parliament at the wee hours of last Thursday, passed off like the phantasmagoria of a fevered dream. One could hardly get a wink of sleep, and could hardly believe it could happen in 21st century Parliament of Ghana.

An all-white uninformed horde of 137 members of the NDC had in a zombie-like manner taken seats at the right hand side of the Speaker, where the Majority usually sat, by 10pm, on Wednesday. The NPP caucus came haphazardly, individually, all cheers taken off their faces, not focused, and were “forced” to occupy the left hand side of the Speaker’s seat where the Minority usually sat. Amewu appeared unenthused, but was immediately whipped in line with the others. Ursula Owusu had broken the “protocol” and insisted on sitting among the “unfriendly” NDC. An NDC MP-elect pulled the seat. She fell, and she returned from the loo to find her seat taken up by Akandoh. She insisted on her right and ended up sitting on the lap of Akandoh and giving him a smooching pre-swearing-in ecstatic affaire de coeur.

There was a hushed silence when the Clerk and his assistants walked elegantly into the Chamber at 12:05am (Thursday) and started the ball rolling. Osei Kyei Mensah Bonsu nominated Prof. Mike Oquaye for Speaker, extolling his immense academic credentials and his rich parliamentary experience. Haruna Iddrisu touted the 28-year parliamentary experience of Alban Sumana Bagbin, recommending him for Speaker. Afenyo-Markin’s innocuous question was whether the Clerk had received an Order from Cape Coast High Court on James Quayson. Muntaka’s point-of-order appeared not to have caught the eye of the Clerk, and Osei Kyei Mensah insisted: “What you (Clerk) informed us is the number of persons who will be voting…” The Clerk, Cyril Nsiah, confirmed receiving “an Order of Interlocutory Injunction from Cape Coast High Court at 4:55pm on January 6, 2021, from Justice Boakye signed by Hamza, the Court Registrar… I am therefore unable to recognise James Quayson…” – and hell broke loose. Dr. Ayine reminded the House that Hamza was a Registrar, not a bailiff. Some of us prayed very hard not to get trouble for our friendly hardworking Registrar who had just recently swapped places with the current Registrar of Kumasi High Court. James Quayson himself sat calmly, even when Afenyo-Markin reminded the House that James Quayson was in the Cape Coast High Court when the ruling was given. At 1:35am, the Clerk was being heckled… at 1:45am the Leadership of the NDC walked out of the Chamber, followed by Osei Kyei Mensah Bonsu, returning at 1:49am to heed K.T. Hammond’s advice to keep calm, and allow for voting. Adwoa Sarfo warned James Quayson to “bow down your head in shame … and move out of the Chamber…” or else he would be cited for contempt of court later.

The Clerk took an about-turn in not recognising James Quayson. He only referred him to Article 105 of the 1992 Constitution: “A person who sits or votes in Parliament knowing or having reasonable grounds for knowing that he is not entitled so to do commit an offence and shall be liable on conviction, to such penalty as shall be prescribed by or under an Act of Parliament.” The onus, therefore, lay on James Quayson to decide to sit in the Chamber, and vote! That is, despite the Cape Coast High Court’s invocation of the non-recognition on account of Article 94 clause 2 of the 1992 Constitution: “A person shall not be qualified to be a Member of Parliament if he (a) owes allegiance to a country other than Ghana (and readers may recall the jailing in 2012 for two years by an Accra High Court of Adamu Sakande, NPP MP for Bawku Central, for perjury, forgery, and deceit of a public officer. It was a Bawku-based cattle dealer, Sumaila Bielbiel who had taken the matter to court, for Sakande’s dual Ghanaian and Burkinabe citizenship. Sakande’s lawyer, Yoni Kolendi’s plea for mercy on Sakande on account of poor health fell on deaf ears! He died on September 22, 2020 in London. The Bawku Central seat was retaken by Ayariga after it became vacant with the jailing of Sakande).

Whilst the NPP caucus sat calmly, the NDC side were all over the place. Muntaka, John Jinapor and Sam George appeared belligerent. At 1:45am, the NDC caucus led by Haruna Iddrisu staged a walk-out; they returned at 1:49am after they had consulted “Aberewa”. At 2:07am, the ballot box was brought amidst confusion.

At 3:08am, the names of the MPs were being called for voting: Abdullai… Binduri Constituency… Then a scuffle broke out again… Muntaka could not understand why NPP MPs voting would display their ballots which were supposed to be “secret”. At 3:30am, John Jinapor had pushed down a NPP MP-elect. He and Sam George chose to play “chas-kele” with the electoral booth. K. T. Hammond’s plea: “Montena ase” was drowned by the tumultuous din of the unruly MP’s-elect.

At 3:42am, a platoon of the military invaded the Chamber in a “huhudious” fashion “Aye-ka”. Some people who had seen the impending constitutional crisis got haunted. “Away, away”. “And help us to resist oppressor’s rule, with all our wits and might for ever more.” – and the NDC MPs-elect confronted the well-composed military. The nation had been saved by a whisker, and there was no J.J. Rawlings-like commando or cavalier. At 3:53am, the dare-devil men retreated. At 4:03am, the Caucus-leaders walked out of the Chamber. K. T. Hammond: “Sit down” addressing the uncontrollable NDC MPs-elect, especially Muntaka. A dodgy peace seemed to prevail, after an uncharacteristically peaceful Kennedy Agyapong endeared himself to the gallery, displaying: the Gentleman of the Day!

At 4:39am, the balloting resumed: “Abekah Ericson, Shama …” Someone wearing a green traditional cloth, looking like Eugene Antwi, Subin MP-elect appeared to have avoided the electoral booth. Did he think it was Covid-infected? By 6:30am, voting had ended, and counting started. Then, as if caught by kpokpo-gbiri-gbiri, Carlos Ahenkorah had rushed to the counting table to snatch some ballots, and was doing a Usain Bolt. Incroyable! Sorry, incredible! An honourable man? Rumours were spreading that whilst Prof. Mike Oquaye had 136, NDC’s Alban Bagbin had 138. Assuming all NDC MPs-elect had voted for Bagbin, he would have had the 137, but who in NPP added 1? And which MP-elect had the “spoilt ballot”? There arose the need for a compromise. NDC Bagbin, the Speaker; NPP Joseph Osei Owusu, First Deputy Speaker; NPP Asiamah, the rejected stone, Second Deputy Speaker. They were sworn-in by the Chief Justice, Anin Yeboah. To the NDC, it was a strategy gone correctly: “Aba-mu awie, Onyame bohye no…”

The “conspiracy theory” alleging NDC disruption of the swearing-in of the President had failed because of NPP’s tranquillity at the Chamber of Parliament. If the NDC attended the inauguration of the President, they must have been “invisible men”, but the Speaker, Alban Bagbin’s gargantuan-like presence overshadowed NDC absence. So, why should NPP be morose? You have won the biggest diadem…what again?

PS If we were writing in the 1960s, the heading would have been “Kaikaiku Concert Party at Parliament”.