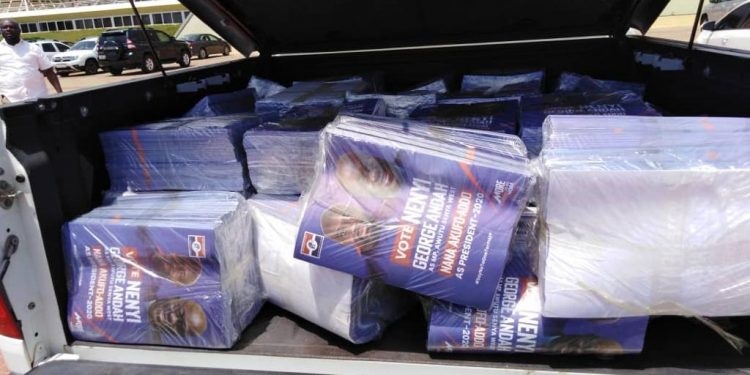 Some of the logistics presented by Eugene Arhin

Director of the Communications at the Presidency (Jubilee House), Eugene Arhin, has made various donations towards the campaigns of two NPP parliamentary candidates in their bids to retain their seats for the party.

They include Deputy Minister of Communications, George Nenyi Andah, MP for Ewutu Senya West in the Central region, where Mr. Arhin’s father hails from and Deputy Minister of Health, Dr. Bernard Okoe Boye, MP for Ledzokuku in Accra, who is his Legon Presec schoolmate.

“We in the NPP must not only ensure a resounding victory for President Akufo-Addo on December 7, but we must also strengthen our grip even further on the legislative arm of government, to, in the words of the President, ‘enable us to do four more years of advancing the peace, progress and prosperity of our nation for you’,” he said.

Mr. Arhin’s move follows a similar donation last weekend to the NPPs parliamentary candidate for Mfantseman, Ophelia Hayford, who was nominated by the party to replace her late husband, Ekow Kwansah Hayford.

Mr. Arhin during the presentation said in the Central Region that “we currently have 19 seats out of the 23 in the region; it wouldn’t be right for us to lose any of the seats in the run up to the 2020 elections.”