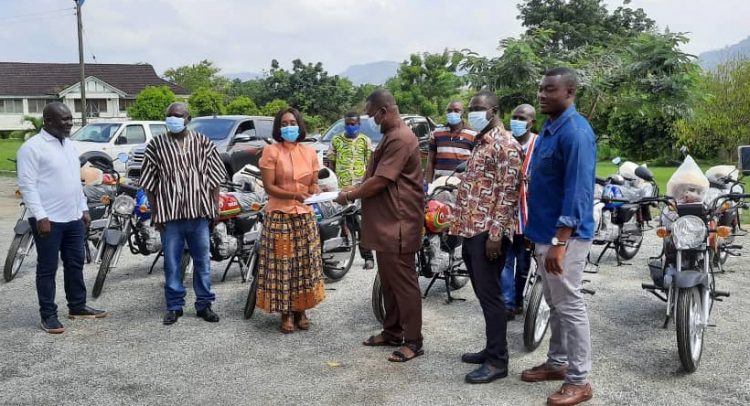 The deputy minister and the regional chairman

Member of Parliament (MP) for Atiwa East Constituency, who doubles as Deputy Minister of Finance, Abena Osei-Asare, has donated 13 motorcycles and other campaign logistics to the New Patriotic Party (NPP) in Koforidua in the Eastern Region.

The minister said the donation formed part of her effort to help enhance the electoral fortunes of the party in the region and win the 2020 general election convincingly.

“In 2016, the party did very well in the region by obtaining 64% of the valid votes cast. Judging from the performance of President Akufo-Addo’s government in less than four years, there is no doubt that we can achieve a much higher percentage in the region than we did in 2016.”

She said “this can be achieved, largely on the back of a well-resourced party machinery; and I am of the firm belief that this donation will help in that regard,” she added.

Eastern Regional Chairman of the NPP, Kingston Akomeng Kissi, who received the donation for and on behalf of the party, lauded the kind gesture of Ms. Osei-Asare saying “the party is grateful to you for making this noble donation at this crucial time.

“I assure you that the logistics received from you today will be deployed immediately to areas that need them the most; and we will ensure that they are put to maximum use to secure four more years for President Akufo-Addo to do more for Ghanaians.”