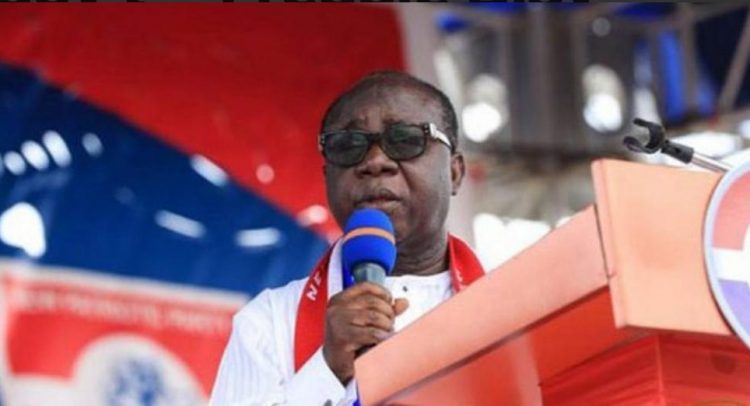 NATIONAL CHAIRMAN of the ruling New Patriotic Party (NPP), Freddie Blay, has virtually spelled out what his party needs to do urgently in order to retain political power for three consecutive terms in 2024.

Addressing delegates of the NPP at this year’s annual National Delegates Conference at the Heroes Park in Kumasi yesterday, he stated that the NPP would not win the 2024 polls on a silver platter.

According to Mr. Blay, the party should strategically work to prevent all forms of internal rancour and backbiting and rather uphold unity and oneness at all levels of the NPP in order to help deliver victory 2024.

He also said hard work and determination was also crucially needed so that the NPP would retain political power and continue with their good works.

Freddie Blay said it would be suicidal for the party if the NPP members decided to sit idle and fold their arms, thinking that President Akufo-Addo government’s good works alone would automatically lead to victory 2024.

According to the NPP National Chairman, the party members should work harder than they did in 2016 and 2020 so that their resolve and ambition to “break the eight-year rule cycle in 2024 will become a reality.”

Freddie Blay warned that anti-party actions such as arrogance and self centeredness should also be relegated to the background by every NPP member, especially those in strategic positions, to boost party unity and strength.

He also cautioned every NPP member, especially those that have the ambition to contest for key party positions next year, to conduct a clean and civil campaign devoid of insults and name-calling.

According to him, the aspirants should use the opportunity that the upcoming internal party polls presents, to preach the good works of President Akufo-Addo’s administration and help win more souls for the NPP, ahead of 2024.

“Next year promises to be an exciting period for our internal politics, as many amongst us will be offering to serve and justiciably so, compete for the various offices in our great party at the polling station, constituency, regional and national levels. However, let us all be wise enough to learn from our previous mistakes, particularly eschewing the actions and inactions that have in the past, characterised and led to bitter and rancorous campaigns,” he cautioned.

The NPP National Chairman added that, “The upcoming internal elections should be a great opportunity for aspirants to project the party’s achievements,” noting that the party should also work to heal all wounds if any.

Freddie Blay, who boasts of several years of political experience, also urged the party to re-energise its base so that they would easily surmount every challenge that the opposition political parties would pose in 2024.

He reiterated his stance that the ruling NPP are better managers of the economy.

He said that anytime the NPP is in power, there is economic stability and growth of industries, and once they leave the scene, everything crumbles and it has always taken the NPP to fix the mess.

To that end, he called on the party to remain united ahead of the next general elections in order to continue staying in power to deliver good governance to Ghanaians.

“We have to remain united so that at the end of the four years the people will vote for us or whoever represents in the 2024 elections. If we are united, if we eschew arrogance, if we work with our people, if we keep base, come 2024 we shall still retain power,” he said.

The historic programme is under the theme “NPP: Our Resolve, Our Determination and Commitment to Ghana’s Development”. It was attended by NPP delegates from all the 275 constituencies in the 16 regions of the country.

President Nana Akufo-Addo, Vice President Alhaji Bawumia and other key party members from all corners of the country and even beyond, were at the Heroes Park, venue of the event, to make the national conference grand.