Jean Mensa, Others In Kenya For Pre-Polls Assessment 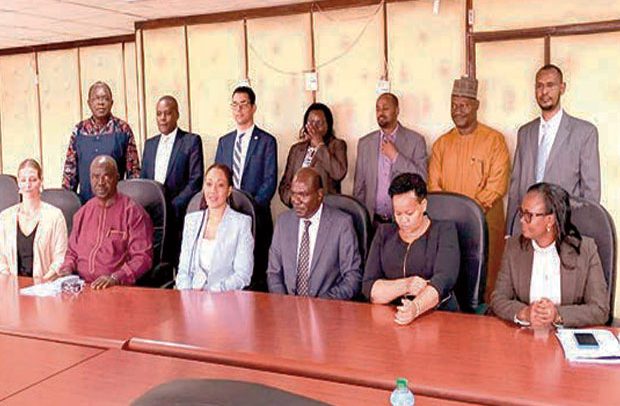 Jean Mensa ( third from left) with the Chairman of the Independent Electoral and
Boundaries Commission, Mr. Chebukati and other commissioners in Nairobi

Electoral Commission (EC) Chairperson, Jean Mensa, was part of a team of election experts on a mission to Nairobi, Kenya, for the East African country’s pre-election assessment preparedness last week.

The mission was led by representatives of the National Democratic Institute (NDI) and the International Republican Institute (IRI), internationally reputed democracy enhancement entities.

Kenya goes to the polls in August and the Ghanaian election management experience vis a vis international best practices were shared by Ms. Jean Mensa for the benefit of her hosts.

Other members of the delegation were James Lahai, the National Coordinator of the National Election Watch (Sierra Leone); Nicole Rowell, Acting Vice President of the NDI (USA) and Yomi Jacobs, Resident Programme Director for the IRI in Kenya and Nigeria.

A joint statement by the IRI and NDI disclosed that the assessment which spanned May 16 to 20, 2022, conducted its activities in accordance with Declaration of Principles for International Election Observation, “which was launched in 2005 at the United Nations, and in compliance with the laws of the Republic of Kenya.”

The statement added that all activities were conducted in non-partisan fashion and without interference with the election process.

According to the originating report, “the 2022 general elections have the potential to be a pivotal milestone for democratisation in Kenya as they take place against a backdrop of shifting political alliances and newly enacted and evolving amendments to the electoral law. Kenyans have the potential to break the pattern of disputed elections and prevent election-related violence in 2022.”

The Pre-Election Assessment Mission is funded by the US Agency for International Development (USAID).

“Since their founding in 1983, IRI and NDI have collectively organised more than 400 international assessment and observation missions globally,” the report added.