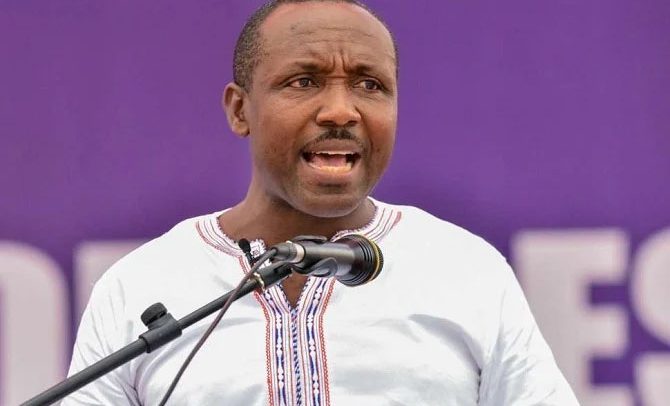 The General Secretary of the ruling New Patriotic Party (NPP) has pleaded with Ghanaians to accept the 1.75 per cent E-levy on Mobile Money (MoMo) and all electronic transactions to enable the government to provide the requisite projects to develop the country.

According to John Boadu, within a period of five years, this government has constructed more roads and introduced human-centred interventions more than any other government.

He, however, indicated roads and other projects left to be done are huge and that government needed more revenue to undertake those projects.

He revealed that currently, the taxes being paid by Ghanaians constitute 14 per cent of entire revenue generated by the nation.

“Yes it’s true that we are paying taxes but the country is not getting the required revenue to provide infrastructural projects,” he added.

He said, “If we are not careful and don’t widen the tax net for a lot of people to contribute for the tax revenue to increase, as the government seeks to do, we will be in a poverty cycle all the time.”

Speaking in an interview with Takoradi-based Skyy Power FM, Mr Boadu indicated majority of the money the government gets for projects are from loans and grants among others.

He said even the various telecommunication companies who not construct roads, charge one per cent on any transaction adding, “What do they use that money for.”

He, therefore, appealed to the entire citizenry in the country to accept the tax which is the E-levy.

“If possible, projects constructed from the money accrued from the tax should have inscriptions on them indicating they are E-levy projects as was done in the case of HIPC projects,” he stressed.

“Do we want to still go on this trajectory? The answer is no,” he indicated.

He said apart from revenue and expenditure, budgets are used as instruments to shape and change the direction and functions of governments.