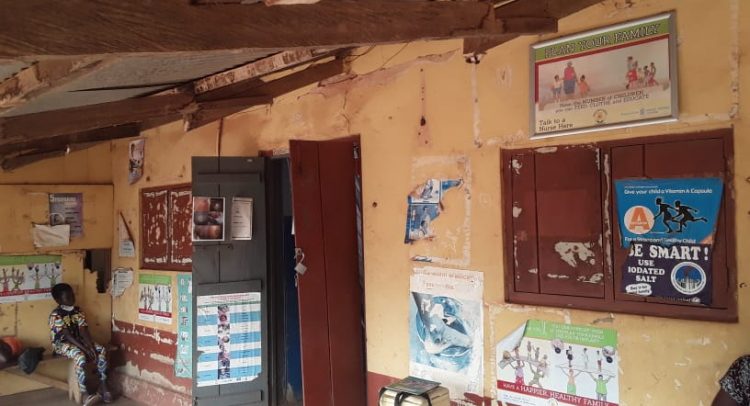 “We are in a death trap. Anything can happen at any time. We always pray against the rain, because we get scared the facility will collapse over us when it rains.”

These were the words of a pregnant woman, Bertha Ananfo, who is receiving care at the Kecheibi CHPS Compound in the Nkwanta South District of the newly created Oti Region.

The facility which serves over 8000 residents covering seven communities including Kecheibi is in a dilapidated state. The situation is so bad that a disaster may befall the country if nothing is done about the situation.

A tour of the facility confirms the looming disaster and fears of both patients and the four health personnel working there.

The entire facility which the staff say was constructed in 1992 by the community has cracks all over its walls. The paint has all washed off exposing the dirty concrete surfacing. 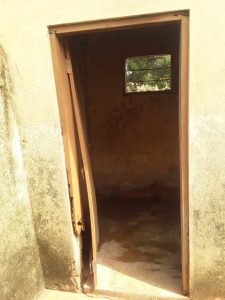 The facility which has been partitioned with plywood into three cubicles for delivery, consultation and records/storeroom has cracks all over the dusty concrete floor.

Parts of the pillars have become weak, with the wooden beams forming the ceiling yielding to the devastating termite invasion. To the extent that, the roofing is visibly overlapping each other at some sections. 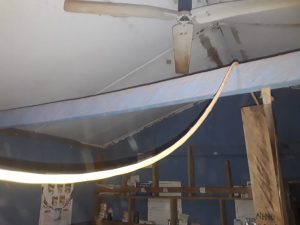 The only respite from the heat; thus the rain has also become something both patients and staff dread, due to the excessive leakage of the roof, flooding of the corridors and vibrations caused by the rainstorm. They fear the building will collapse whenever it rains.

The midwife in charge of the facility, Mina Biney noted that despite the challenges she and her team face, they attend to all cases and refer the ones that are beyond them to the Nkwanta South Municipal Hospital.

She explained that the CHPS compound’s location along the Nkwanta Dambai Highway makes it a go-to place for many medical emergencies, yet they lack the requisite space, equipment and medication to stabilise most of the cases before referring to Nkwanta.

For instance, the delivery bed is the only bed in the facility; hence serves as a bed for other clinical procedures like suturing, wound dressing, first aid, family planning among others.

Overcrowding, lack of space and excessive heat in the consulting room, has left them with no option other than to have the OPD, Consulting and some family planning services outside.

That notwithstanding, the facility is one of the best as they attend to an average of 200 OPD cases, 90 pregnant women, and 60 family planning clients every month.

This figure excludes home visits and other services.

The building has developed gapping cracks both in the walls and ceiling, thereby putting them at the mercy of snakes, scorpions, rats and bats.

The roof also leaks during the raining season.

The solar system that supports rooms and the health facility is down, thereby increasing their electricity bill.

They also share the only toilet facility (which is less of a KVIP) with the clients. “Our source of water (borehole) which we share with the community is also in a bad state.”

According to him and Mina, several appeals to the municipal assembly, health directorate and chiefs in the area are yet to yield any meaningful result.

They have therefore appealed to NGOs, philanthropists and other faith-based organisations to urgently come to their aid.

‘We Didn’t Focus On Our Crisis’