The Ghana Armed Forces and the Police Service have jointly confirmed the death of one member of the Homeland Study Group Foundation (HSGF).

HSFG is a secessionist organization calling for the independence of Volta Region from Ghana.

The group, according to the police and the armed forces, on September 25, 2020, at about 2:00am, mounted road blocks on the Juapong-Accra and Sogakope-Accra main roads “thereby disrupting the daily routine of the citizenry.”

In a joint statement signed by Colonel Eric Aggrey-Quarshie, Director of Public Relations, Ghana Armed Forces; and Sheilla Kessie Abayie-Buckman, Director of Public Affairs, Ghana Police Service, the two security agencies said the activities of the separatists who are pushing for the creation of the so-called Western Togoland, have been brought under control.

According to the statement, “all the roadblocks have also been cleared and the security agencies have taken control of the highways and strategic installations within the region.”

It added that “it is hereby stated that an earlier pre-emptive operation on Thursday 24 September 2020, foiled a plan by the Group to burn the Ho Central Market and other key installations.”

Attached below is the statement 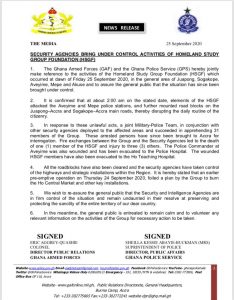