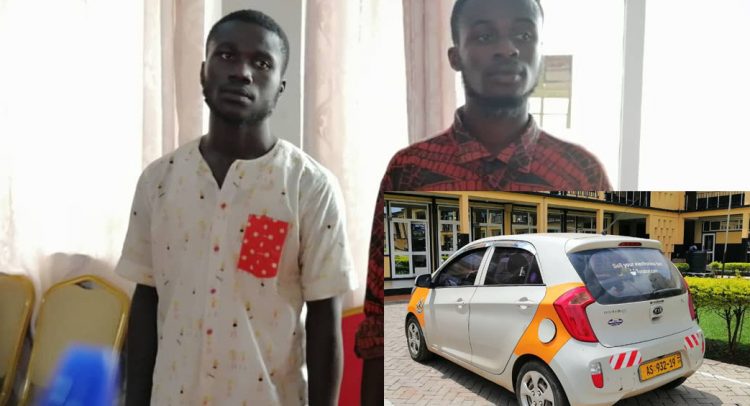 The suspects. INSET: The cabbie

POLICE IN Kumasi have arrested two persons in connection with the alleged murder of a cabbie after snatching his taxi at Atwima Dida near Brofoyedru in the Ashanti Region on September 27, 2019.

The suspects, who were identified as Benjamin Arthur alias Kofi Nkrumah and Ebenezer Arthur, were said to have committed the crime when hired the services of the late Isaac Ofori in charge of a Kia Morning taxi cab with registration number AS 932 – 19 from Breman to Atwima Dida.

Briefing the media about the arrest, Ashanti Regional Police Commander, COP Kwasi Mensah-Duku, said the two, who were armed with guns, shot Isaac Ofori on the chest at close range upon reaching Atwima Dida, killing him instantly.

He disclosed that the incident happened around 10:00 pm at a secluded part of the community where the hoodlums had taken the victim to.

The police chief indicated that the goons ,who are believed to be part of a car-snatching and robbery syndicate terrorizing residents of Kumasi, pulled the victim from the car after killing him and drove it to their base at Kasoa in the Central Region on that same night.

COP Mensah-Duku narrated further that luck, however, eluded the robbers when the car was traced with a tracking device and intercepted at Kasoa where suspects Benjamin Arthur and Ebenezer Arthur were arrested.

The police commander said one of the suspects mentioned one Erasmus Adama Nketiah alias Adama as their accomplice.

According to him, Adama has since gone into hiding and is being sought by police, whilst the Benjamin and Ebenezer remained in police custody assisting with investigations.

He stated that police also retrieved the taxi cab, to be used as an exhibit for the prosecution of the duo in court.

COP Duku-Mensah advised residents in the region to take their personal security seriously as the criminal elements in the area had changed their modus operandi.