6 In Court Of Inhuman Treatment Of 16-Year-Old Boy 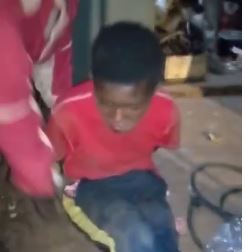 The Agogo Magistrate’s Court has remanded into custody six people for abusing a 16-year-old minor at Agogo in the Asante-Akim District of the Ashanti Region.

The six, who were remanded into Police custody to assist with investigations, will reappear on July 27.

Chief Superintendent Owusu Bempah told the Court, presided over by Davies Obeng, that on Saturday, July 10, the Police had information that one Enoch, the victim, had been subjected to severe beatings and inhuman treatment.

In a video circulating on social media, the victim had his limbs bound and subjected to beatings, and at a point in time, had a stick inserted into his anus, the Police reported.

According to the Police, the victim was alleged to have stolen money from a store at Agogo, belonging to one Obeng-Amoako, one of the accused persons.

He said the six accused were arrested in the course of investigations and arraigned.

The victim has been hospitalized at the Agogo Presbyterian Hospital and undergoing treatment.