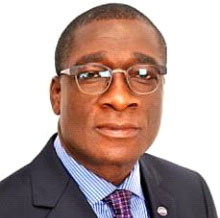 Solicitors for Dr Kwame Achampong-Kyei, KAA Law, have described as false and unfounded recent media publications which seek to create the impression that he engaged in some illegality in the acquisition of a licence for the erstwhile Sovereign Bank.

In a statement issued yesterday and signed by K. Amofa-Agyemang, Esq., they noted: “We wish to emphatically state for the record and without any equivocation that nowhere in the Bank of Ghana’s press release was it stated that Dr. Kwame Acheampong-Kyei committed any fraud for the brief period he was associated with Sovereign Bank.”

The solicitors further said: “We deem the said publications and circulation as mere fabrications, albeit provocative, aimed at tarnishing the hard-earned and impeccable reputation of Dr. Kwame Acheampong-Kyei.”

They stated that Dr. Kwame Acheampong-Kyei resigned from the Board Sovereign Bank early this year when he noticed that certain improprieties had taken place in the management of the affairs of the bank without his knowledge.

“Since then, he has never had anything to do with the bank again.

“It is therefore unfortunate that attempts are being made to soil his reputation purely out of mischief and bad faith.”

They were enraged by the deliberate peddling of blatant falsehood against Dr. Kwame Acheampong-Kyei, a highly regarded entrepreneur extraordinaire.

“These wrong publications could have been avoided by simply crosschecking the facts from the Bank of Ghana.”

“While setting the record straight, we also wish to state that we would not hesitate to take the necessary steps, including legal action, to protect the image of our client against any person or group of persons, who may persist in spewing falsehood against Dr Kwame Acheampong-Kyei.”