AG Wants GRA To Sit Up 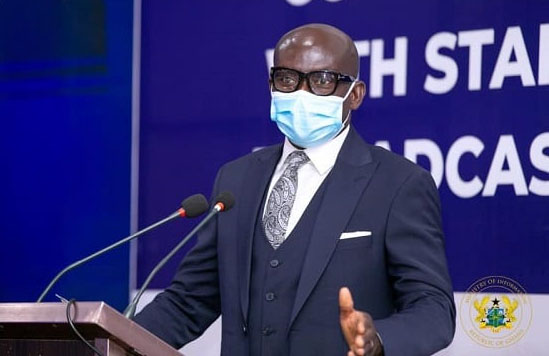 The Attorney General and Minister for Justice, Godfred Yeboah Dame, has taken a swipe at lawyers engaged in what he called the “vicious and misguided” practices of denigrating the judiciary and undermining public confidence in the sound administration of justice.

According to him, there appear to be deliberate misrepresentation of the effect of court rulings as well as false and vitriolic commentary in the media and they are “purely inspired by a vile motive to run down the judiciary.”

Addressing the 2021 annual general conference of the Ghana Bar Association in Bolgatanga in the Upper East Region on Monday, the Attorney General said the arena for a lawyer to test the strength of his/her reasoning or the validity of his/her argument is in the courtroom, and “not on the airwaves or modern day social media.”

“Even when applications duly filed in accordance with law and procedure are pending before the highest court of the land, some legal practitioners do not spare an effort to prejudice the minds of the public with mischievous analysis on public radio, television and social media, all calculated to force the hands of the judge(s) to deliver the verdict in a particular manner (sic),” he stated.

Mr. Dame noted that such lawyers also do that deliberately to whip up sentiments of the public against the particular court hearing the matter in the event of an outcome not favourable to them.

“These practices are vicious and misguided to say the least,” he stressed and continued that he needed not to remind members of the GBA at the gathering that the responsibility for a fair and effective administration of the laws of the Republic of Ghana is a product of the collective efforts of all.”

“The nature of our laws enacted by Parliament, the procedure and judgment of our courts, the work of law enforcement officials, the wisdom, skill and zeal of the Bar are all crucial,” he indicated.

For the AG, throughout the history of Ghana, the judiciary has served the country well in its capacity to develop fundamental principles and give life to the aspirations of the citizen, and said “it is no time to destroy the same beyond redemption, or to, may I borrow the words of Lord Toulson at this stage, ‘to give it a funeral oration’.”

He recalled that the state was recently castigated widely for incurring a judgment debt in excess of $15 million as a result of the activities of the erstwhile Inter-Ministerial Committee on illegal mining about two years ago.

“In July this year, I successfully led the prosecution of an application to set aside the said judgment. Some lawyers who are active players on the social media, perhaps feeling disappointed that a weapon deployed by them in their attack on the State’s measures to resuscitate the war against illegal mining – ‘galamsey’ had been destroyed, mounted unwarranted attacks on me and the judge who delivered the ruling, with some suggesting rather preposterously and absurdly, that the Judge in question should be removed from office.”

“How ridiculous! It is as if they revel in judgments or rulings against the State, and when the same are successfully challenged, it is disappointment galore for them,” he said.

He assured the Bar that so far as he is the Attorney-General of Ghana the State would “zealously protect its interest in litigation, just as private legal practitioners will protect the interests of their clients.”

“A victory for the State, to the chagrin of a private person, is no justification for unwarranted attacks on public officers responsible for the State’s victory,” Mr. Dame posited.

He stated further that the necessary “efforts are being made to ensure that the industry of state attorneys is properly complemented with a supply of resources required to assist them in the discharge of their constitutional functions.”

“I must report that in response to a special appeal I made to Cabinet in June, this year, the Minister for Finance has released the entire sum stated as required for a satisfaction of the needs, and out of this, 89 vehicles as well as office equipment necessary for our work will be procured for the Office of the Attorney-General and Ministry of Justice,” he revealed.

He added that he was happy to say that per the timelines for the procurement activity, the entire 89 vehicles will be delivered within 10 – 12 weeks, and that all regional offices and relevant agencies under the Ministry would have their fair share of the supply.

“Work on a 12 storey building to accommodate the Office is also steadily progressing and is on course to be completed within about 18 months. We are grateful to you, Mr. President.  A well-oiled Attorney General’s Department is the biggest signpost for improved conditions in the practice of law.”

Gov't Settles On Rocksure • To Develop $6billion Nyinahin-Mpasaaso Mine