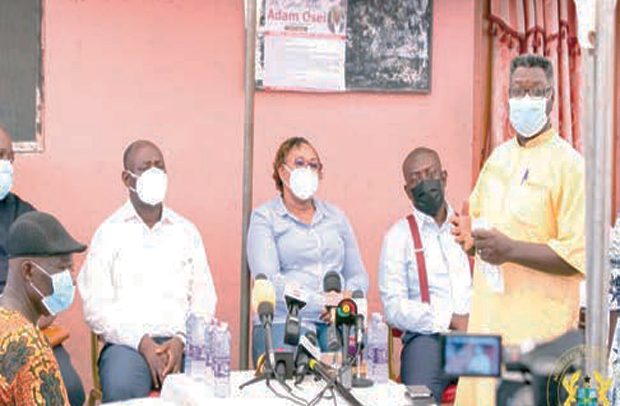 The ministe rs interacting with the fisherfolk on Sunday

The government has launched an inter-agency investigation into the reported incidents of dead fishes of various species that washed ashore on beaches in Accra and Axim in the Western Region over the weekend.

The Ministry of Fisheries and Aquaculture Development is leading the investigation with other agencies including the Fisheries Commission, Food and Drugs Authority (FDA), the Environmental Protection Agency (EPA), the Ghana Maritime Authority (GMA), the Ghana Navy, the Marine Police and the respective Metropolitan, Municipal and District Assemblies in the areas affected.

The investigation is expected to determine the causes of the deaths as well as an effective collaboration to prevent the dead fishes entering the country’s food chain.

A statement signed by the sector minister, Hawa Koomson, assured the public that it would take all the necessary steps to protect the fisheries industry from the potential harmful effects of the incident.

The FDA also in a statement said lab investigations are being conducted to ascertain whether the fish washed ashore at the Osu Castle is good for consumption or otherwise, and has therefore advised the public to desist from consuming the fish, in view of the potential risk to health and safety.

The washed-ashore fish typically shows signs of popped out and unclear eyes, dull colouration of gills, bloating around the abdominal areas and possible oozing of foul scented fluids.

The Authority has dispatched its inspection teams to various fish markets around the country’s coasts where various species of fish washed ashore.

These markets include the Osu Mandela Market in the Korle-Klottey Municipal Assembly as well as other markets in the Western Region.

The public is also being entreated to inspect the freshness of the eyes and gills of fish they seek to buy, which should generally be reddish in colour.

Meanwhile, the FDA is entreating members of the general public to inform the Authority of persons who may be engaging in the buying and selling of these fishes.

“The public is hereby advised to report all suspected cases of possession or selling of these washed-ashore fishes to the FDA or local authorities. The consuming public is also cautioned to be wary of both fresh and recently smoked fish which are being sold at unusually low prices,” the statement concluded.

The Ghana Police Service and security officials have been alerted to arrest any person found distributing fish from these incidents into the Ghanaian food chain.