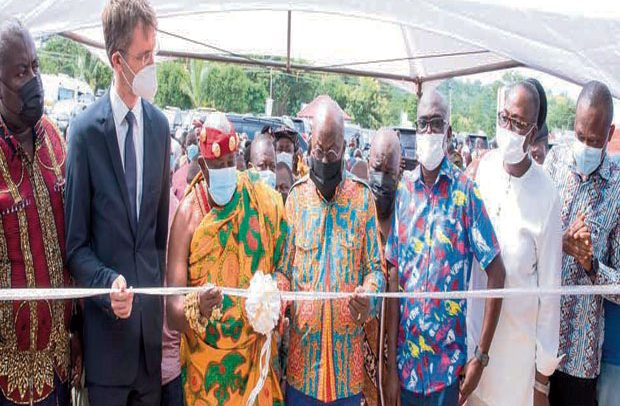 President Akufo-Addo yesterday commissioned a $16 million tomato processing factory at Domfete in the Berekum West District of the Bono Region.

The facility, called Weddi Africa Tomato Processing Factory, is part of the One District One Factory (1D1F) initiative that the Akufo-Addo-led NPP government has commenced to industrialise the country.

The government, through Ghana Exim Bank and ADB Bank Ghana, facilitated the acquisition of the loan facility to support the establishment and operations of the factory owned by Weddi Africa Limited, a wholly owned Ghanaian company.

According to President Akufo-Addo, the establishment of the factory is an example of the critical role the private sector can play in Ghana’s industrial transformation.

He said that the setting up of the manufacturing facility, outside the traditional areas of Accra, Tema and Takoradi, underscores the commitment of the government to decentralise industrial development and, thereby, stimulate economic activity in the rural areas.

He said Domfete was chosen for the siting of the factory because the town happens to be one of the major catchment areas for the cultivation of tomatoes, and will help in reducing rural-urban migration.

Additionally, a model farm and research centre to conduct seed trials and train farmers on best farm practices, as well as an agric-input shop to supply inputs to the farmers at affordable prices, have been established by the company.

This, the company explains, will boost the profitability of the factory and improve income levels for the farmers engaged by the company.

There is also a 2,400-acre farmland, as nucleus farm, set up by Weddi Africa, with the company also spearheading the establishment of a Tomato Outgrower Farmers Association in Tano North and Berekum West districts, with 2,000 registered farmers from Ahafo and Bono regions.

These 2,000 farmers are on schedule to receive seeds, fertilisers, other inputs, and technical services from the relevant MDAs and the government supported mechanisms have been put in place to provide the requisite support services to ensure the profitability and sustainability of the factory.

The factory has so far created 158 direct jobs with 2,100 indirect job opportunities also created for the people of Berekum West District and surrounding communities.

Government, President Akufo-Addo assured, is committed to supporting private sector operators like Weddi Africa Limited to position themselves to become globally competitive, and, thereby, take advantage of market integration frameworks, such as the African Continental Free Trade Area (AfCFTA), whose Secretariat has been established in Accra.

Indeed, the Ministry of Trade and Industry in collaboration with relevant MDAs, has established an institutional mechanism to provide strategic support and assistance to the local private sector operating at the district level.

This is in reference to the establishment of Business Resource Centres as one-stop enterprise support centres in 67 districts across the country, 37 of which have already commenced operations and 30 are under construction.

The President commended the German Agency for International Cooperation (GIZ), West Africa Centre for Crop Improvement (WACCI), Food & Drugs Authority (FDA) and various stakeholders for the support they have provided to the company.

He also commended the Chief Executive Officer of Weddi Africa Limited, Mr. Yaw Boahene and his team, for establishing such a modern manufacturing facility in Domfete near Berekum in the Bono Region, in support of the government’s Industrial Transformation Agenda.