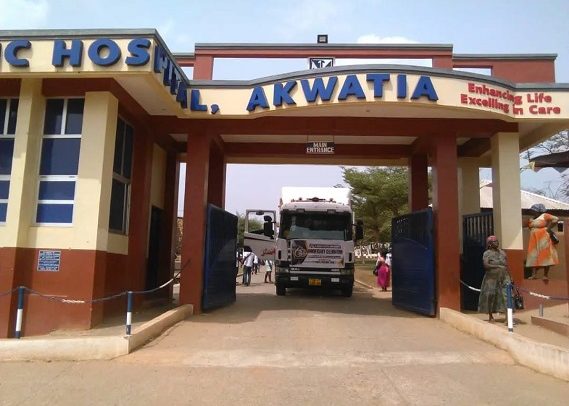 St. Dominic Hospital in Akwatia, the District capital of Demkyembour in the Eastern Region has come under pressure over alleged medical negligence which has caused damage to the hand of a year and three months, old twin baby.

The right hand and forearm of the baby are rotting away due to negligence.

The baby boy was admitted to the facility on November 30, 2021, for treatment of a childhood hernia.

However, according to the nursing mother, the wrong insertion of a cannula by a clinician at the hospital caused the infection to the hand hence swollen.

The condition worsened within a few days at the hospital but urgent attention was not paid to the baby until his condition went bad.

The baby was however discharged on December 31, 2021, without the intended surgery performed or treatment of the cannula infection which led to an abscess of the hand.

Lydia Dagadu, mother of the twins said she went back to the hospital to complain about the worsening condition of the baby but management refused to hear her.

“The elder twin is the one they have damaged the hand. I went to the hospital with the baby on November 31, 2021, and on December 4, 2021, a Doctor Dr. Abu was trying to set the line for the cannula but was struggling to get the vein so he asked for help from another Doctor. The next day my baby’s hand was swollen. When I started complaining they came to take away the cannula”.

“They further conducted a scan and told me the hand of the boy has damaged, that they need to cut off the damaged hand which I opposed. I insisted they explain to me what caused it but they refused “.

Rev. Father Kenneth Abban, an administrator in Charge of St. Dominic Hospital alleged the injury of the baby was caused by a Juju man they sent the baby to.

However, in swift rebuttal, the nursing mother Lydia Dagadu described Rev. Father Abban’s claim as concocted lies created to save the face of the hospital.
According to her, the condition of the boy occurred at the hospital and after a month of no treatment at the facility, she invited a herbalist to access the condition while at home after discharge.

She however said the herbalist refused to attend to the baby because he said it was beyond his capacity.