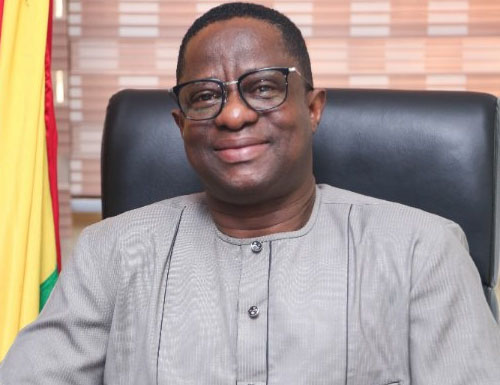 The Supreme Court has set March 30, 2021 to give its ruling on an application for review challenging its decision to set aside the orders of a Ho High Court, which placed an injunction on the gazetting of John Peter Amewu as Member of Parliament-elect for the Hohoe Constituency in the Volta Region.

The review application filed by Tsatsu Tsikata, counsel for the interested parties, was contending that the Supreme Court committed errors of law which occasioned miscarriage of justice and ought to be reversed.

Moving the application yesterday, Mr. Tsikata argued that the grounds for the applications disclosed fundamental errors which required the review to be granted in the interest of justice.

The review is also challenging the holding of the court that its jurisdiction does not extend to the consideration of the constitutionality of Representation of the People (Parliamentary Constituencies) Instrument, 2020 (C.I. 128).

According to Mr. Tsikata, although C.I.128 was not part of the basis of the case before the Ho High Court or the Supreme Court, once it came up and they contended that the Instrument was unconstitutional, the court should have gone ahead to determine the constitutionality or otherwise of C.I. 128.

Again, the review application argued that the Supreme Court misapprehended the case of the affected applicants which hinged on the denial of over 17,000 people the right to vote in the 2020 Parliamentary Election.

Mr. Tsikata argued that claim by the court that Mr. Amewu had nothing to do with the case before the High Court was a fundamental error because the court made a determination of fact without any evidence before it and also went beyond its jurisdiction in doing so.

He concluded that the errors made by the court were fundamental on ground that it did not take into account its own decided cases and the fact that the right to vote was a fundamental right and not a right of directive principles of state policy.

The application was opposed by Grace Awu, a Senior State Attorney who argued that the issues raised in the review application had already been determined by the court and no new issues had been raised.

She conceded that the right to vote was a fundamental right as stated by the authorities and cited by Mr. Tsikata but added that the other issues raised by the application were just a rehash of issues that had already been determined by the court.

She added that the application did not properly invoke the review jurisdiction of the court.

A seven-member panel of the court presided over by Justice Yaw Appau and assisted by Justices Samuel Marful-Sau, Lovelace Johnson, Gertrude Torkornoo, MadauTanko, Henrietta Mensa-Bonsu and Emmanuel Yonny Kulendi after listening to the parties set March 30, 2021 to give its ruling.

A Ho high court presided over by Justice Buadi on December 23, 2020 granted an interim injunction aimed at restraining the EC from gazetting Mr. Amewu as MP for Hohoe in the Volta Region.

But the AG’s office went to the Supreme Court challenging the decision and argued that the orders of the court presided over by Justice Buadi constituted a “flagrant abuse of the process of the court.”

During the hearing of the case, the then Deputy AG and now the AG, Godfred Yeboah Dame, argued that the application filed at the Ho High Court by the interested parties was a parliamentary election petition dressed as human rights action.

It was opposed by Mr. Tsikata who stated that the admission by the then Deputy AG showed that the right of the people of SALL to vote and be represented in parliament was violated by the EC.

A five-member panel of the court presided over by Justice Yaw Appau in a unanimous decision held that Mr. Amewu, though a beneficiary, had nothing to do with the denial of the right of the people of SALL to vote in the parliamentary elections.

The court had also held that the applicants went to the Ho High Court with an election petition disguised as a human rights issue but Mr. Tsikata said the court erred in taking the decision.