He is expected back in the country on Sunday 23rd January 2022 to preside over the opening of the Second Session of the Eighth Parliament on Tuesday 25th January 2022.

In a correspondence letter available to DGN Online dated 6th January 2022, to the Presidency, the speaker said that he was traveling to the UAE on 7th January 2022 for a medical review.
It is the second visit of the Speaker to Dubai for medical attention in less than two months where collosal amount of money is spent.
He has occasionally been traveling to Dubai for medicare since he was elected speaker with large retinue of personal and domestic staff following him.

The Speaker was recently in Dubai for similar medical review after creating confusion in Parliament over the Electronic Levy controversy.

He had allegedly presided over the rejection of the budget after the majority walked out.

In a letter issued and signed on behalf of the Clerk of Parliament to the Head of Mission of Ghana Embassy in UAE, it stated that “I have been directed by the Clerk to Parliament to inform you about the arrival of the Speaker of Parliament, Rt. Hon. Alban Sumana Kingsford Bagbin, in Dubai to undergo a medical review”.

The speaker stormed Dubai with his wife and other family members as well as staff of Parliament.

The statement said that the Speaker will be accompanied by the following: Alice Adjua Yornas, his wife, Dr. Prince Kofi Pambo, head of medical at Parliament house, Patience Bagbin, speaker’s secretariat and Justice Norvor, his aide.

Published below in full is the letter from the Speaker of Parliament. 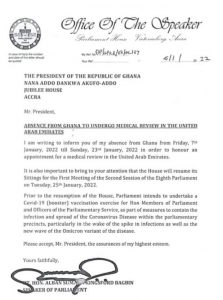 ‘Easter In Kwahu Likely To Take Place This Year’