Blows Over Farmland At Akwadum 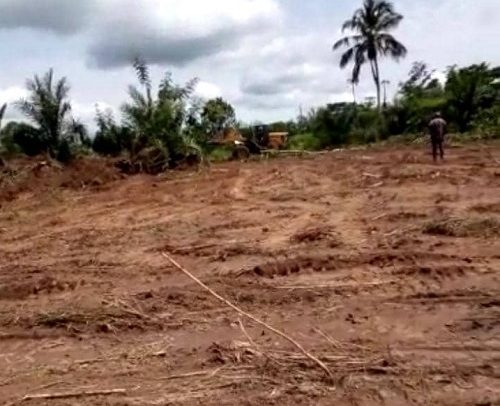 A Sub-chief of Juaben in the Ashanti Region, Baffour Nana Agyei has been accused by a farmer, Yahaya Yakubu of using an excavator to destroy his 11,7 acres of farm plantations at Akwadum, a farming community near Koforidua in the New Juaben North Municipality of the Eastern Region.

According to the farmer, the sub-chief who inherited the land from his uncle Captian Amoah without doing any proper negotiations with them rather went ahead in his absence and took an excavator to destroy his 11.7 acres of Palm seedlings, 5 acres of cassava, 11 acres of plantains, coconut of 5 plots, and 880 pieces of blocks on the land.

The wife of the farmer, Afia also said the chief before working on the site went to the Densu river close to the farm to perform some rituals before ordering the excavator to destroy the farmland, adding that he then demarcates a portion of the land at the riverside to them, which they rejected since that wasn’t the initial agreements.

The farmers claimed the chief used his power to destroy the plantations without any compensation after serving on it for the past 30 years.

However, the chief, Baffour Adjei when contacted said he met and negotiated with them before taking the steps since he had the news that the chief of Akwadum has ordered the commuters in the area to register their lands at his palace.

He declined the allegations that he didn’t compensate them.

The Dead-Goat Must Not Be Allowed To Resurrect!