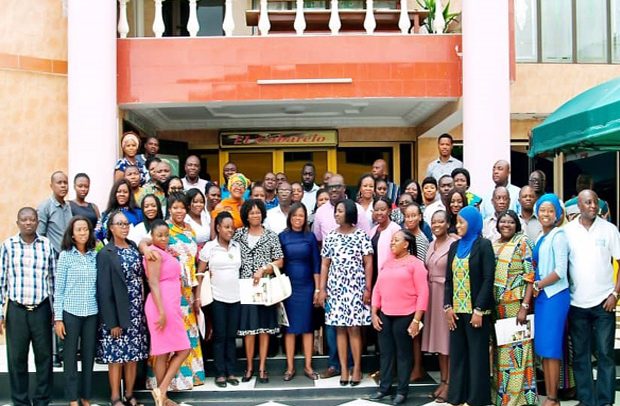 Regional MMDA and NGO partners at the training workshop

An intervention by UNICEF in some selected districts in the Greater Accra Region, under the Child and Family Welfare Policy of Ghana and the National Gender Policy, has helped in reducing the exploitation of children.

Making this known during a week-long training for Metropolitan, Municipal and District Assemblies (MMDAs) on Adolescent Sexual and Reproductive Health at Dodowa, District Chief Executive for Shai Osudoku, Daniel Akuffo, shared the impact of the intervention in his district.

He said it has helped prevent violence, abuse and exploitation of children while protecting them from all forms of harm.

“The intervention is timely since my District is rapidly urbanizing with people from Accra finding this place as the choice destination, and we all know urbanization comes with its own challenges,” Mr. Akuffo added.

He also stressed the heightened levels of awareness of child protection issues that communities in the district have recently recorded, owing all to the input from the new Policy.

Mr. Akuffo however called for continuous and dedicated support from organizations so that they can increase the coverage from the 33 communities currently benefiting to all 200 communities in his district.

Acting Regional Director for the Department of Community Development, Vera Allotey, outlined the several activities that have been undertaken towards the implementation of the Child Protection Tool Kit in 255 communities in six districts of the region.

“Twenty-three thousand, seven hundred and eleven (23,711) participants have been reached and sensitized through intensive community engagement done from November 2018 to February 2019,” she said.

She added that while the measures they had set in place had not been somewhat successful in dealing with the issues, a response in the form of new set of tools and additional modules on Adolescence, Sexual and Reproductive Health, Gender and SGBV have been developed and finalized for production.