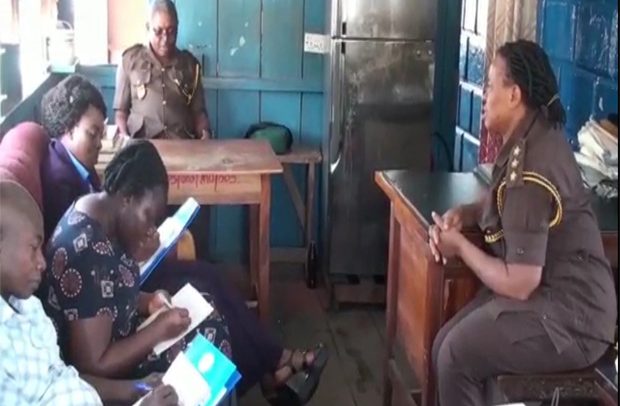 THE COMMISSION on Human Rights and Administrative Justice (CHRAJ) has appealed to government to take action to improve conditions at the Obuasi Local Prison after giving it the lowest grading for safety and purposeful activity.

Offices for staff of the prison also get flooded any time it rains because of roofing leakages which affect documents kept in them.

Leading a delegation of CHRAJ officials during a visit to the prison last week, Mrs. Martinson gave the correctional facility the lowest grading and described conditions there as shocking and unfit for purpose.

“Our visit has revealed that lots of people on remand have been left unattended to by CID officers who are supposed to take them to court. There is someone who ought to have been given bail long time ago, but still remains a prisoner,” she asserted and added that congestion was also a great concern at the facility.

The prison, which currently holds more than 280 prisoners, received lowest level grading for respect of human rights of remand prisoners and rehabilitation of other inmates by the commission.

According to the CHRAJ boss, the commission wanted to flag the issues at the prison and bring attention to them for redress.

She said it was part of their strategy to write notification letters to AngloGold Ashanti and other organisations to come to the aid of the facility.

She revealed that only one out of the five toilet facilities at the prison was in good shape. The rest had broken down and were being managed by the 280 inmates at the prison.

“The sewage is also full and breaks behind the prison walls, thereby posing a lot of risk to the general public, who complain bitterly on a daily basis,” she stated and appealed to corporate organisations, religious bodies and philanthropists to come to their aid.

“Anybody at all can be in prison (by circumstance) and an assistance extended to us will go a long way to improve conditions here (Obuasi Prison),” DSP Esther noted.