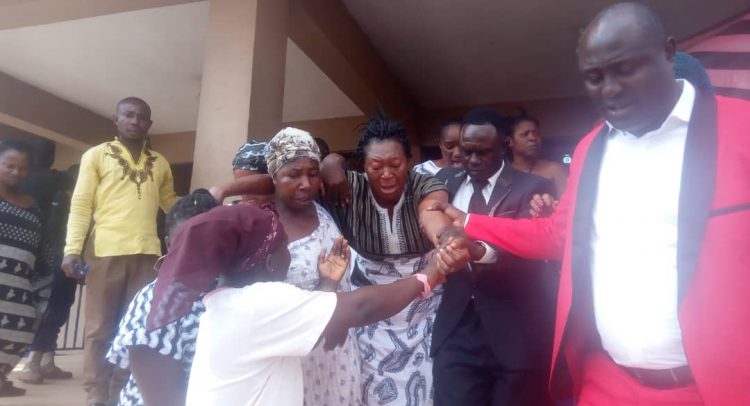 Mother of the deceased being consoled

RESIDENTS OF Tafo in the Tafo-Pankrono Municipality of the Ashanti Region are outraged after a 34-year old man died following a physical confrontation with three police officers.

The officers including a community police assistant, were said to have pounded Kofi Poku’s face and hogtied him as he cried out for help after they had run after his car to stop him at Tafo Mile Three on Sunday afternoon.

Eye witnesses said the victim popularly known in the area as Asko was subdued by police with batons and fists on the street when he allegedly failed to stop his car after being signaled to do so.

He is believed to have died of injuries to his head and body at the Komfo Anokye Teaching Hospital where he was rushed to for medical attention by some residents who went to his rescue, DGN Online gathered.

He was initially taken to the Tafo Pankrono District Police headquarters by the officers before being rushed to the hospital.

Mother of the victim, Nana Akua Bema, wants answers in the death of her son, whom she described as an innocent man who did not commit a crime to warrant police brutality.

“They also arrested his younger brother who went to his aid. Is that the way the police, as law enforcers, behave?” she questioned.

Meanwhile, nine people were arrested in connection with the incident and the police have so far not spoken about the incident.