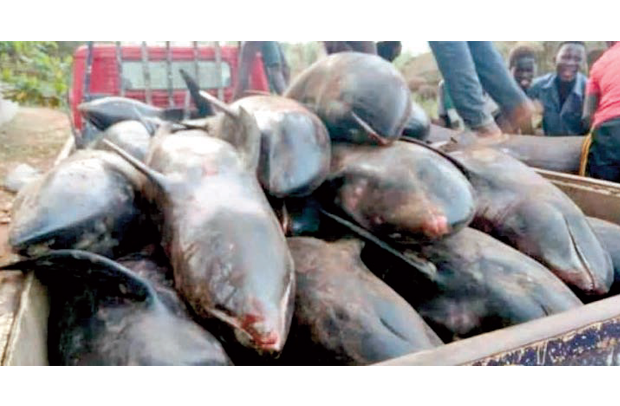 Some of the dead dolphins being transported by residents

The washing ashore of some hundreds of dead fishes along the beach at Osu, in Accra, and live marine mammals suspected to be dolphins, in Axim, in the Western Region, have triggered a flurry of investigations at the Fisheries Commission and the Environmental Protection Agency (EPA).

At first it was the sighting last Friday of some fishes along the beach close to the Castle Road, as the authorities cautioned the public from picking and consuming them.

Then by the weekend, many dead dolphins washed ashore in Axim.

The unusual occurrence at Osu, Accra, attracted a large crowd, a situation which had environmental officers rushing to the scene to stop excited bystanders from picking and consuming the dead fish.

Investigations have already been commenced by the Fisheries Commission of the Ministry of Fisheries and Aquaculture.

The Commission’s Executive Director, Michael Arthur-Dadzie, in a statement on the subject, pointed out that “a team from the Fish Health Unit and the Fisheries Scientific Survey Division of the Fisheries Commission was dispatched to the area. Upon arrival at the beach, the team noticed that there were dead small pelagic and demersal fishes at the shore.”

Continuing, the statement explained that “initial observation of the fishes showed no wound /lesions on their bodies.”

Samples of the fish and sea water have been collected for further analysis, DAILY GUIDE has learnt.

Initial observation by the experts who were at the scene is that “the colour of the sea and temperature are normal.”

The EPA has also waded into the anomaly, its Executive Director, Dr. Henry Kokofu, having noted that even though they suspected that the fishes were not safe for consumption, they required scientific evidence to make a definitive call.

He said the EPA was also picking up additional information from some opinion leaders to help with its investigation, adding “but if there is anyone who has any information on how this issue came about, that person should contact us.”

A feature of the strange fishes was that they changed colour within a few hours after being washed ashore.

The flesh of the fishes were found to be sticky, similar to glue after dissection, the Municipal Chief Executive of Korle Klottey Assembly, Nii Adjei Tawiah, said.

It is believed that the fishes have already found their way to the markets and are being sold at cheap prices, hence the caution to desist from consumption of the product until they are cleared.

Authorities from the health directorate of the assembly, the Food and Drugs Authority (FDA) and the police have taken samples for further examination.

The Assembly has subsequently cordoned off the area to bury the rest of the fishes and avoid further harvesting and distribution at the markets.

Some critics blamed it on activities related to the construction of the Marine Drive Tourism Investment Project, while others feared it could be due to oil spillage at sea.

In the Axim incident, which occurred on Sunday, residents of Brawie and Lower Axim, predominantly fishing communities in the Nzema East Municipality of the region, observed unusual big fishes washed ashore.

The big fishes, some of which were said to be alive, are thought to be dolphins, and according to the residents, the ancient fishing communities have never seen such big fishes before.

For some however, the landing of the strange fishes was a sign of a bumper harvest in the Axim area.

According to an eye witness, who gave his name only as ‘Wonders’ and resides in Axim, the situation attracted many people to the beaches.

He said in the early hours of Sunday, some residents along the Brawie and Ankobra beaches, all of a sudden, saw the big fishes washing ashore and were amazed and terrified.

“We have been fishing for years here in Axim and its adjoining communities but we have never seen such big fishes before. The fishes were far bigger than the ones washed ashore in Accra,” he stated.

He stressed that because the fishes were alive, most of the fishermen, particularly, the young ones rushed to the scenes with tricycles and other containers to collect the fishes for sale.

“The young ones here rushed to collect the mammals for sale without finding out what might have caused the fishes to wash ashore in the communities. I learnt the fishes attract high price,” he added.

He said later the police warned those carting the mammals for sale to desist from that since the fishes might not be good for consumption.

“As I speak, some of the big fishes are still alive at the beaches but the police are patrolling there and are not allowing anyone to take them anymore.”

It is suspected that climate change could also be responsible for the unusual spectacle. But until a conclusive explanation is proffered, various theories would fly about in both the social and traditional media.

The Accra segment of the Atlantic Ocean is no stranger to dead marine mammals landing on its beaches.

The Mensah Guinea area close to the Christianborg Castle has hosted a few dead whales in the past four decades.