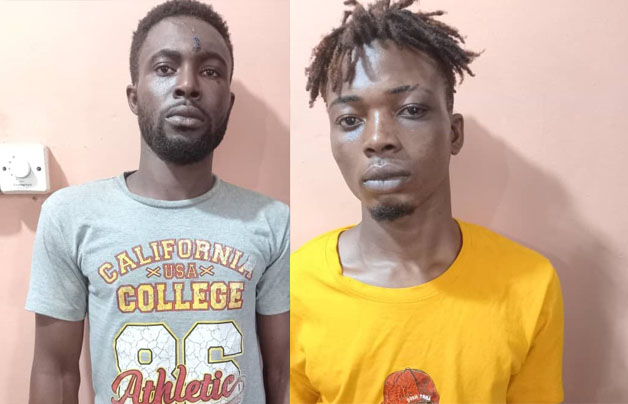 Two persons, who allegedly robbed a commercial motor rider of his motorcycle and mobile phone at Dansoman in Accra, have been remanded into Police custody by an Accra Circuit Court.

Mawuli Amegbo, a drinking bar operator and Sulley Mohammed, a plumber, charged with conspiracy to commit crime to wit robbery and robbery, pleaded not guilty.

The Court, presided over by Evelyn Asamoah, held that due to the facts and nature of the case, the accused persons be remanded into Police custody to reappear on June 29.

Chief Inspector Haligah said two other accomplices, namely Jalo and another are at large.

He said on June 13, this year, Mr Attoh was riding his Royal 325 Motorcycle with registration number M-21-GW 490 valued at GHC4, 500 and at around 1900 hours same day, one of the suspects at large engaged the complainant to take him on his motor bike from Korle Bu to Dansoman.

The Police said on reaching Tonga, a suburb of Dansoman, the accused and one Jalo, who were all on one motorbike suddenly crossed the complainant with their motor bike forcing the complainant to stop.

The prosecution said the complainant fearing for his life, surrendered the bike with his infinix hot eight mobile phone.

The Prosecution said the accused persons, however, could not start the complainant’s motorcycle.

The prosecution said the complainant raised an alarm leading to their arrest.

He said, however, Jalo escaped and the two who were grabbed were handed over to a police patrol team and an official complainant made at the Police station.
GNA

Sales Assistant In Court For Stealing