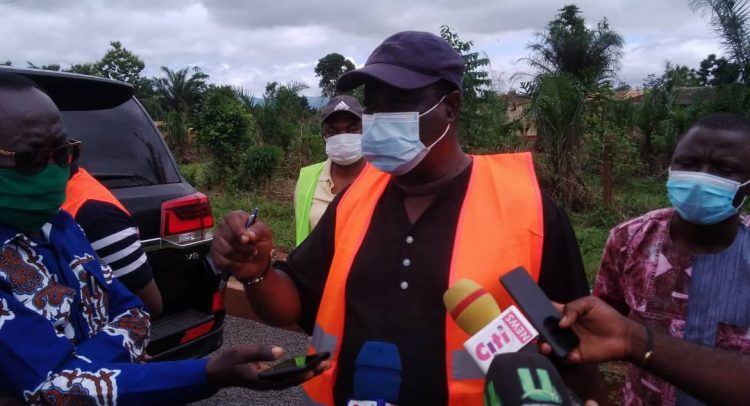 Amoako Atta flanked with his entourage on a road tour.

Kwesi Amoako Atta, the Minister of Roads and Highways, has disclosed that the President Nana Akufo-Addo’s led New Patriotic Party (NPP) government is currently embarking on 134 road projects in the Eastern Region.

According to him, as of January 2017, out of a total road network of 78,000 kilometres in the country, only 23% had been paved whereas the remaining 77% remained at either the gravel or earth.

The Roads and Highways Minister made these assertions at a news conference in Koforidua, the Regional capital after inspecting some roads in the region.

“As I speak today, I can speak on authority that 134 different road projects are going on in this region which are being handled by each of the agencies in my ministry simultaneously in Eastern Region. The agencies as I mentioned are the Ghana Highway Authority, the Department of Feeder Roads and Department of Urban Roads”

The President in an encounter with the media in 2019 reiterated that government would embark on an aggressive road development across Ghana in 2020, saying “Next year is the year we will adopt as the year of roads.”

He averred that apart from the 134 road projects going on across the eastern region, there are also a total of 107 different road projects that are being worked on in the procurement process and the process starts from the identification of certain key roads that should be tackled which includes cocoa roads sponsored by Ghana Cocoa Board.

He noted that his ministry started a national tour about a month ago and has promised to use two months to tour all the 16 regions in the country.

He has so far tour eight regions which include, Ashanti, Northern, North East, Upper East, Upper West, Savanna, Central and the Eastern Region.

According to him, the government is working tirelessly to bring as many roads as possible from poor to fair condition and from fair condition to good condition.

“I will not refer you to any blue book anywhere to go and verify this road, that is being done in the past to the existence of roads in a certain green book which never existed,” he said.

Mr Amoako-Atta added that the situation of roads in the country for the past 60 years seems not to be encouraging and is of the view that, it was the peculiar task facing the president and his administration but undaunted and courageous as he has always been.

He noted that “I am happy to tell the people of the eastern region that the president is on top of the road infrastructure of the country. A lot has been done within the three and a half years that God and the good people of Ghana put him in charge of the administration of the republic”

“In my capacity as the sector minister for the president, looking after the sector on his behalf, I can without the slightest doubt and with all confidence announced that road construction is going on simultaneously in all the sixteen regions of our country and in all the 260 districts of Ghana and I am saying so with absolute confidence” he stated.

According to him, the President Akufo-Addo administration will not stop even for a day so far as road infrastructure is concerned as he strongly believes they have a lot do and are determined to build roads in Ghana.

He added that in government’s bid to develop the nation they are fired up to open up roads, saying that if they are able to open up roads it means they are opening up for economic development to take off since roads represent the fulcrum around which all economic activities stand.

The Minister, who’s the Member of Parliament for Atiwa West in Eastern region affirmed that as road transport dominates among all transport in the country (98%) and for that matter, it is therefore not a mere coincident that the president declared 2020 as the year of roads.

EC Boss To Address Nation On June 29 Ahead Of Registration